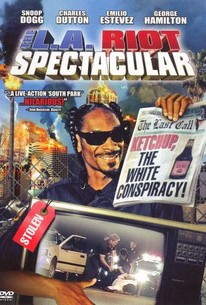 The controversial satire The LA Riot Spectacular plays for mordent laughs the events that consumed L.A. in 1992, after the police officers on trial for beating motorist Rodney King were found innocent. The city was engulfed by a massive riot, but the film plays these moments for laughs. In addition to recreating some of the images seen on television, the film skewers a variety of figures including the police, the media, and the citizens of the city.

George Hamilton
as The King Of Beverly Hills

[The] pic feels overlong because once it's established that this is going to be a tasteless, if occasionally hilarious, exercise in social criticism, the movie needs to constantly accelerate the level of hilarity, which is impossible to do.

A veteran director of music videos, [Marc] Klasfeld has for his feature film debut churned out a lifeless series of sketch-comedy ideas that presumably would make even the Wayans brothers blanch at their broadness.

[T]he most riotous, raucous, rowdy, ribald and uproariously funniest satire to hit theaters in years. And I admit right now, I had to see it four times to hear all the jokes because I was laughing so hard.

The gags are mortally unfunny.

...occasionally funny, but the tone is mostly one of frantic and forced "outrageousness"...

Stunningly, the end of 'The L.A. Riot Spectacular' promises a sequel taking on the OJ Simpson trial. If I have to physically go to the west coast and prevent this from happening, I'm prepared to make that commitment.

A film that works overtime to offend each and every ethnic group and economic class that makes up the smoggy purgatory of Los Angeles while simultaneously patting itself on the back for being so putatively daring.

There are no featured audience reviews yet. Click the link below to see what others say about The L.A. Riot Spectacular!