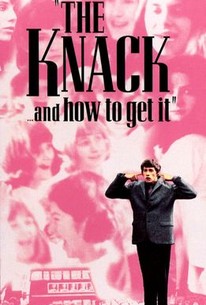 The Knack...And How to Get It Photos

Colin (Michael Crawford, who much later won a Tony Award for his role in Broadway's Phantom of the Opera) is an uptight schoolteacher whose housemate, Tolen (Ray Brooks) is a consummate womanizer. Colin imagines a long line of young women in tight white sweaters on his stairwell, waiting to get into Tolen's room. Jealous of Tolen's incredible success with the ladies, Colin asks Tolen for advice on how to get a girl. When Tolen's advice doesn't seem very practical, Colin decides that his first order of business is to get a bigger bed. Colin is also trying to find a third roommate to take a spare room. Tom (Donal Donnelly), who seems compelled to paint everything in sight, happens by the house, and inserts himself in the spare room without so much as saying "hello." Nancy (Rita Tushingham of A Taste of Honey) is new in town, and wanders the streets of London in a fruitless search for the YWCA. She runs into Colin and Tom at the dump, where they are procuring a gigantic bed. They offer her a ride, and proceed to race through London on the bed. Colin seems too shy to speak much to Nancy, despite Tom's encouragement. Eventually, the trio reach Colin's house, where Tolen works his gruff magic on Nancy, and havoc ensues. Capturing late 1960s London in black-and-white, Richard Lester's The Knack. . .and How to Get It was released between the director's two successes with the Beatles, A Hard Day's Night and Help. The script, by Charles Wood (An Awfully Big Adventure) is based on a play by Ann Jellicoe. Future stars Jacqueline Bisset, Charlotte Rampling, and Jane Birkin appear briefly amid all the attractive young women in the film.

Gerald Toomey
as Boy in Classroom

Katherine Page
as Woman in House

Jane Birkin
as Girl on Motorbike

Critic Reviews for The Knack...And How to Get It

The sets by television designer Assheton Gorton only emphasise one's earlier mystification that the British cinema has not made more use of his remarkable talents.

The screenplay by Charles Wood (based on the play by Ann Jellicoe) is alive, written for the cinema with as many sight gags and visual trips as can be packed or stacked into the thin little story line.

Mr. Lester uses the devices he used to such splendid effect in A Hard Day's Night. Only here they don't work so well. The Knack seems overdirected.

The Knack... is yet another example of the danger of messing about with someone else's work, especially something so quirkishly self-contained and carefully planned as Ann Jellicoe's play.

This is a new breed of film too, free form and antic. For all of its derivativness, Lester's combination of elements has a freshness to it.

Everything about the film feels genuine and uncalculated, and it finally comes across as one joyous celebration of life and of being alive.

Audience Reviews for The Knack...And How to Get It

Poor Michael Crawford needs help from his friend to get a girlfriend, at least he thinks he needs help. This movie is pretty funny most of the time, but it's not all that interesting, it's just entertaining.

A quirky film, full of fun and silliness "swinging 60's" style! It has a Benny Hill meets Austin Powers sort of feel to it. As a fan of Ms. Tushingham I'll admit that my feelings are a little biased, but she is definately the glue here. Though the rest of the cast does a fine job as well. We were surprised to see several "up and comings stars pop up through out, including several future cast memebers from The Vicar Of Dibley! A very young John Bluthal (Frank) and someone who looked and sounded like a very young Roger Lloyd-Pack (Owen) as one of the (uncredited ?) who heckled Rita from the windows as she passed. In any case it's a fun little jaunt if you like films that are more style then substance.

A group of young adults learn about love, life and fun in Black & White 1965 London. Tolen is a womanizer. Rita Tushingham is a woman. We also have good Colin and Tom. The dialogue is snappy and wild, often interjected with comments on the side by random citizens. The scenes where they're pushing a bed through the streets is amazing. The 60's swinging music makes this movie so much more more. Each major character has realized something by the end of the adventure. It's charming stuff.

The Knack...And How to Get It Quotes