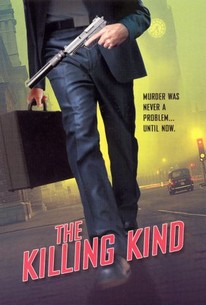 When a deadly assassin lets his emotions get in the way of his work, he is forced into a deadly confrontation with the very man who trained him in the debut feature from cinematographer-turned-director Paul Sarossy. Thanks in large part to the training of his tattooed mentor, Jon has quickly become one of the most efficient and effective assassins in the underworld. When Jon takes a particularly demanding mission to heart and fails to follow through, his betrayal ignites the rage of the only man with the skill to take Jon down. Now locked into a vicious struggle for survival, Jon must outsmart the very man who trained him or die trying.

Critic Reviews for The Killing Kind

Beautifully filmed. It is sharp as a stiletto, entirely etched in tones of blue and black.

The film looks fantastic, all dripping greys and glaring whites ... but this genre has been done to death.

Rich Cline
Shadows on the Wall
View All Critic Reviews (4)

Audience Reviews for The Killing Kind

A disappointlngly albeit probably sincere attempt to present a complex character who is not. The psychological make-up of Andrew Howard's character is a mismash of ideas making me picture some writer who took a basic psychology course and earned a middling grade.

My guess is that we're supposed to sympathize with Howard, but there's no way this is possible, especially given his final two audience-cheating murders. When he dies, it's definitely good riddance. The only thing that would have been better would be if all his nasty, crazy associates had died along with him.

The one and a half stars here are for Geraldine O'Rawe, period. Nothing for her writer/director husband Paul Sarossy or any of the other actors in this smurfer.

This Film is from the 2002 British Independent Film Awards. Its not quite the action packed film that previews make it out to be, About the life of a Hitman working for a Crime boss called tatoo man. Dry and boring at parts still worth 3 1/2 stars no more.