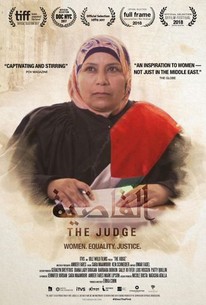 Critics Consensus: Within the immediately accessible framework of its subject's extraordinary story, The Judge offers an enlightening look at issues as timely as they are universally resonant.

Critics Consensus: Within the immediately accessible framework of its subject's extraordinary story, The Judge offers an enlightening look at issues as timely as they are universally resonant.

Critic Consensus: Within the immediately accessible framework of its subject's extraordinary story, The Judge offers an enlightening look at issues as timely as they are universally resonant.

The Judge provides rare insight into Shari'a law (Islamic law), an often misunderstood legal framework for Muslims, told through the eyes of the first woman judge to be appointed to the Middle East's religious courts. The film intimately portrays Judge Kholoud Al-Faqih's trials and tribulations in achieving justice for women within the Shari'a courts of the West Bank, detailing in verité courtroom drama the resistance that she and her male counterpart, a progressive Sheik, face daily.

News & Interviews for The Judge

Rampage Is Exactly What You Think It Is

View All The Judge News

Critic Reviews for The Judge

The Judge is a thoughtful, sympathetic study.

It's an exceptional, multi-dimensional look at the culture from the inside.

Al-Faqih is a role model, and Cohn makes a strong case for her.

Although Faqih speaks eloquently about women's rights and what she stands for, a bit more personal introspection might have been illuminating.

"The Judge" lays out facts while avoiding making easy judgments about how Palestinian men view and treat women.

People who need a fair-minded adjudicator like Kholoud Al-Faqih and are fortunate to have her.

A bracing study of a fearless pioneer whose quest for justice reverberates far beyond Palestine.

While it reminds us that social progress requires sustained effort and perseverance, it also highlights how far the Middle East has changed while giving us a tenacious protagonist.

Equally frustrating and inspiring, The Judge is an accomplished tale of bravery and justice

...offers insight into Palestinian society and politics as well as providing a compelling portrait of the remarkable woman who is its primary subject.

Kohn makes good directorial choices ... intercutting interviews, so that they seem more like a dialogue, following Al-Faqih as she walks about to avoid the 'talking head' feel and inserting aerial footage to bolster the sense of movement.

The Judge is a fascinating insight into a rarely glimpsed world.

Audience Reviews for The Judge

There are no featured audience reviews yet. Click the link below to see what others say about The Judge!