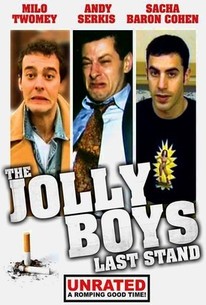 Wedding bells break up the old gang -- and one of the gang members isn't the least bit happy about it -- in this British comedy-drama. A bunch of London drinking buddies call themselves the "Jolly Boys," and devote most of their spare time to swilling beer, goofing off, and generally pursuing unambitious good times. But one day, Spider (Andy Serkis), the group's de facto leader, announces he's decided to marry his girlfriend Annie (Rebecca Craig) -- and what's more, he's even vying for a promotion at work. Des (Milo Twomey), his best friend, agrees to be his best man; he also gets a camcorder so he can make a video about the club's exploits before matrimony lures Spider away. But then Vinnie (Sacha Baron Cohen) decides to follow Spider's example, proposing to his girlfriend Tina (Jo Martin), and Des starts wondering if he's documenting Spider's last days of bachelor freedom or the beginning of the end of the Jolly Boys. The Jolly Boys' Last Stand was shot on digital video, and later transferred to film for theatrical release in the United Kingdom. ~ Mark Deming, Rovi

There are no critic reviews yet for The Jolly Boys Last Stand. Keep checking Rotten Tomatoes for updates!

There are no featured audience reviews yet. Click the link below to see what others say about The Jolly Boys Last Stand!