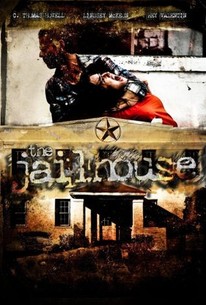 A small-town deputy discovers that old ghosts die hard after moving his family into the living quarters beneath an old jailhouse where terrible events unfolded 30 years prior. It's been three decades since anyone set foot in the old Colton, North Carolina jail, but these darkened cells are about to get some new occupants. Upon arriving at his new post, Deputy Seth Delray (C. Thomas Howell) discovers that his new home is still being remodeled. In the meantime, the sheriff allows Deputy Delray and his family to take up residence beneath the old town jail. Back at the turn of the 20th century, the modest living space used to be home to the local jailer and his family. Shortly after Deputy Delray moves his family in to the space, however, a fire breaks out at the new jail, forcing the sheriff to relocate six of the inmates to the derelict space just above Colton's newest residents. Before the week is over, Deputy Delray will discover that nothing is what it seems in Colton, and that the past has a frightening way of repeating itself in this picturesque little town.

Critic Reviews for The Jailhouse

There are no critic reviews yet for The Jailhouse. Keep checking Rotten Tomatoes for updates!

Audience Reviews for The Jailhouse

A pretty interesting ghost story...but was a little too slow-paced at times.