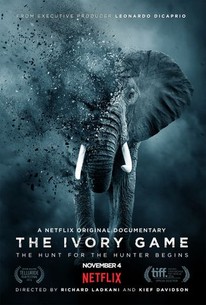 Critics Consensus: Hard-hitting and ambitious to a fault, The Ivory Game serves as a fittingly urgent call to action against a looming threat against vulnerable wildlife and a fragile ecosystem.

Critics Consensus: Hard-hitting and ambitious to a fault, The Ivory Game serves as a fittingly urgent call to action against a looming threat against vulnerable wildlife and a fragile ecosystem.

Critic Consensus: Hard-hitting and ambitious to a fault, The Ivory Game serves as a fittingly urgent call to action against a looming threat against vulnerable wildlife and a fragile ecosystem.

The Ivory Game is an epic documentary feature that goes undercover into the dark and sinister underbelly of ivory trafficking. Award-winning director Richard Ladkani and Academy Award-nominated director Kief Davidson filmed undercover for 16 months with a crack team of intelligence operatives, undercover activists, passionate frontline rangers and tough-as-nails conservationists, to infiltrate the corrupt global network of ivory trafficking. A production from Terra Mater Film Studios and Vulcan Productions, the film follows poachers in pursuit of the 'white gold' of ivory. Time is running out for the African elephants, dangerously nearing closer and closer to extinction.

News & Interviews for The Ivory Game

The Crown, The Emperor’s New Groove, Grosse Pointe Blank, and More Available to Stream on Netflix and Amazon Prime
How Family-Friendly Are Doctor Strange, Trolls, and Loving?

View All The Ivory Game News

Critic Reviews for The Ivory Game

A documentary that plays with the gripping pacing and glossy production values of a suspenseful, international thriller.

While more information on the animals and their ecosystems is needed, the stakes described here are immense, as is the sorrow over majestic creatures massacred only so that their tusks can be made into baubles.

The cameras avoid the goriest angles of the mutilated animals, but the horror is amplified as the film moves from the savannas of Kenya and Tanzania to display windows in Hong Kong showcasing carved ivory curios.

Granted, advocacy docs tend to be kind of dull, but this one tries way too hard to counteract that perception.

So The Ivory Game is often pushily compelling. If it settled down and trusted viewers, it would stand as a stronger documentary. But this is more a work of activism than journalism.

The you-are-there approach to tackling this subject means that The Ivory Game largely avoids lecturing its viewers; instead, the harrowing experience speaks for itself.

It doesn't take an ethnography lab to unpack the vested power of a tusk, but perhaps a more rigorous empiricism (e.g., Farocki), while compromising box-office appeal, could better serve a more enduring agenda.

...more or less derailed by a slavish devotion to a cinematic format that it is not suited to.

Powerful docu shines light on efforts to save elephants.

While it is wonderful to see rangers, conservationists and activists in the documentary trying to fight and expose this terrible crime, you fear it's a losing battle.

It is a film that explains more than it judges, which makes it much more powerful than the standard hand-wringing environmental documentary.

While The Ivory Game's ambitiously broad look at the illegal ivory trade takes on a bit more than it needs to, it does shed some definite light on a growing global problem.

Robert Yaniz, Jr.
We Got This Covered
View All Critic Reviews (21)

Audience Reviews for The Ivory Game

There are no featured audience reviews yet. Click the link below to see what others say about The Ivory Game!