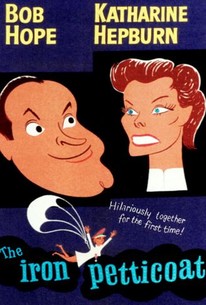 The basic plot for the frothy romantic comedy Ninotchka is revamped and updated to reflect the Cold War in this comedy that stars Bob Hope as an Army major assigned to "westernize" Katharine Hepburn who plays a dour Russian pilot who has defected to the American embassy in Berlin after having an argument with her superiors. The joke is that even as Hope tries to convert her to his philosophies, she is trying to convert him to hers and somewhere in the midst of the ensuing conflict a romance begins to bloom.

Critic Reviews for The Iron Petticoat

A hotch-potch-yet a lot more entertaining than many more satisfactory, more consistent and less ambitious films.

Audience Reviews for The Iron Petticoat

The illustrious Ben Hecht was the initial screenwriter here with a work intended for Cary Grant and Kate Hepburn, but Cary dropped out and so the producers got Mr. Bob Hope instead (yeah I know, what's the connection?). And Hope (as he always did) brought his own writers to, er, "massage the script". Kate wrote in her memoirs that "... so I became his stooge." There was denunciations all round afterwards, after it was panned and bombed, and in the end Hope himself saw to it that this film was not shown in the United States for nearly 20 years. Kate's Russian accent is as bad as could be imagined but at least you can see the old girl working to lift the thing by sheer willpower if need be. Not all of Hope's humor flies either, for all the massaging. This is not quality product. But then it's not all bad either.

Very minor reworking of Ninotchka with Hope and Kate, whose accent is all over the place, sharing little to no chemistry. The script is weak but if Cary Grant, her best costar, had appeared in this as originally planned it might not have been a classic but because of their rapport a much better film than it is.