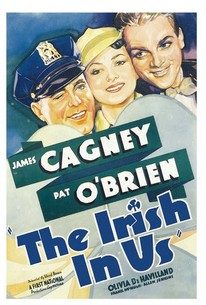 The Irish in Us Photos

In this family comedy, two brothers, a prizefighter's manager and a cop become romantic rivals as they tussle for the love of the police captain's daughter. The trouble begins when she frustrates the cop by falling for the manager.The manager begins promoting a rotten fighter whom he honestly believes can win. On this eve of the championship fight, the boxer gets drunk thereby forcing the manager to don the gloves and fight the bout himself. He does and wins his brother's respect and the heart of the girl.

Bess Flowers
as Lady in Ring

Will Stanton
as Man

Harry Seymour
as Announcer
View All

Critic Reviews for The Irish in Us

As has been the case with so many good artists, the mannerisms hold, for a while, but with a few more such pictures he would be ruined.

Audience Reviews for The Irish in Us

Standard Warners programmer put over by the stars all at the beginning of their careers.

The Irish in Us Quotes