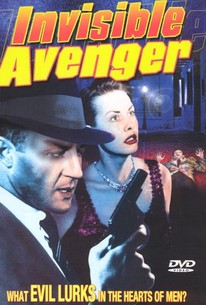 Invisible Avenger is an ultra-cheap melodrama set in New Orleans. The hero, Lamont Cranston (Richard Derr), is a student of mysticism and mind control. At crucial points, Cranston is able to hypnotically "cloud men's minds" so that they cannot see him. If this sounds familiar, it's because Invisible Avenger was the unsold pilot film for a TV series based on the famed pulp-novel and radio detective "The Shadow". This hour-long pilot was released theatrically by Republic after the TV series failed to sell. The plot concerns the machinations of a banana-republic dictator who fakes his own death in order to draw his country's true ruler out of exile, the better to kill the man. Cranston and his mentor Jogendra (Mark Daniels) set things right by pulling their invisibility act. Filmed on location using "natural light" by legendary photographer James Wong Howe, Invisible Avenger is dramatically uninvolving, but holds marginal interest for modern viewers due to the curiously "close" relationship between Lamont Cranston and his instructor Jogendra (who at one point exhibits jealousy when Cranston eyes a pretty girl!)

Sam Page
as Charlie
View All

Critic Reviews for The Invisible Avenger

There are no critic reviews yet for The Invisible Avenger. Keep checking Rotten Tomatoes for updates!

Audience Reviews for The Invisible Avenger

There are no featured audience reviews yet. Click the link below to see what others say about The Invisible Avenger!