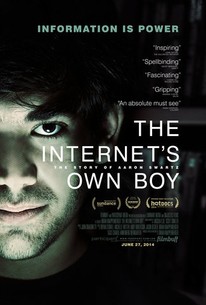 Critics Consensus: Informative and enraging in equal measure, The Internet's Own Boy: The Story of Aaron Swartz uses its subject's tragic tale to deliver an impassioned call to action.

Critics Consensus: Informative and enraging in equal measure, The Internet's Own Boy: The Story of Aaron Swartz uses its subject's tragic tale to deliver an impassioned call to action.

Critic Consensus: Informative and enraging in equal measure, The Internet's Own Boy: The Story of Aaron Swartz uses its subject's tragic tale to deliver an impassioned call to action.

The Internet's Own Boy: The Story of Aaron Swartz Photos

The story of programming prodigy and information activist Aaron Swartz. From Swartz's help in the development of the basic internet protocol RSS to his co-founding of Reddit, his fingerprints are all over the internet. But it was Swartz's groundbreaking work in social justice and political organizing combined with his aggressive approach to information access that ensnared him in a two year legal nightmare. It was a battle that ended with the taking of his own life at the age of 26. Aaron's story touched a nerve with people far beyond the online communities in which he was a celebrity. This film is a personal story about what we lose when we are tone deaf about technology and its relationship to our civil liberties. (c) FilmBuff Participant

News & Interviews for The Internet's Own Boy: The Story of Aaron Swartz

View All The Internet's Own Boy: The Story of Aaron Swartz News

Critic Reviews for The Internet's Own Boy: The Story of Aaron Swartz

Talking (egg)heads reiterate outrage over the Obama Justice Department's witch hunt against him, but Swartz's ex-girlfriend adds heart when she tearfully recalls first seeing the ''end date'' on his Wikipedia page.

The film builds up a portrait of a brilliant, driven, complex young man who's likely to be an iconic figure in the future, a sort of digital-age Che Guevara.

The sad untimely death of precocious internet maven Aaron Schwartz is the focus of this chilling doc.

The film not only canonizes its hero - who committed suicide amid a nasty federal indictment against him - but also brushes aside any big-picture concerns about national security and Internet piracy.

Both moves and outrages, enticing the audience to action. It may not be the most exciting, sexy documentary out there, but it makes viewers feel its subject deeply.

The Internet's Own Boy: The Story of Aaron Swartz simmers with sadness, cynicism and starkness yet never once turns its back on the celebrated digital-aged declaration in a chosen soul out to right the wrong and mince politics with printout sheets.

An insightful look into one individual's struggle with government information policy that has much wider implications.

A brilliant and idealistic soul sacrificed at the altar of Barack Obama's war on intellectual and political transparency.

I was hesitant about seeing this movie. I thought it was just another film glamorizing suicidal people. It turns out to be more of a celebration of the short, but incredibly productive life of Aron Swartz and the things he stood for.

Audience Reviews for The Internet's Own Boy: The Story of Aaron Swartz

An inspiring, enraging and extremely sad documentary about this admirable young man whose only crime in this anti-democratic society was to seek knowledge and try to make it accessible to everyone - and his stupid death shows that a lot must be changed/fought for in this corrupted world.

Aaron Swartz stood for a free and democratic Internet. He was guilty of downloading 5 million scholarly texts from the JSTOR database. However since this material wasn't of a sensitive nature, nor did he plan to financially gain from the acquisition, the infraction seems negligible at best. Unfortunately none of the antagonists agreed to appear on camera. If there's a villain here it's the U.S. attorney's office and specially the chief prosecutor in the case, Stephen Heymann. He doesn't fare too well at all. His absence doesn't help him, but it's hard to say whether it would have served him if he had showed up to defend his questionable motives. Even hallowed university MIT comes under fire for its failure to speak up in Aaron's defense despite their supposed commitment to open access. The end result is a one-sided but emotionally compelling view. It will make you angry but it will also make you profoundly sad. You will mourn this young man who, in the aftermath of the events detailed here, ultimately took his own life. fastfilmreviews.com

"The Internet's Own Boy" is an insightful and informative documentary about Aaron Swartz who facing the possibility of 35 years in jail for downloading intellectual journals at MIT committed suicide at the age of 26. The documentary does a good job of filling in the blanks in Aaron's life, starting with being a computer prodigy in suburban Chicago before dropping out of Stanford University and co-founding Reddit. Along the way, he idolized Tim Berners-Lee who DID invent the internet.(And where is his documentary, by the way?) That led to Aaron not just creating personal wealth, but in taking an interest in the public sphere, especially as it relates to the freedom of information. What "The Internet's Own Boy" does not do especially well is with one exception give the prosecutor's side of events, with the defense presenting almost all of the evidence.(Admittedly, there were a few people who decided not to participate.) In any case, we get a very clear view of what it is like to be prosecuted by federal authorities and investigated by the FBI, for which many people who do not have Aaron's resources have to go through something similar on a daily basis, as is also pointed out here.

The Internet's Own Boy: The Story of Aaron Swartz Quotes