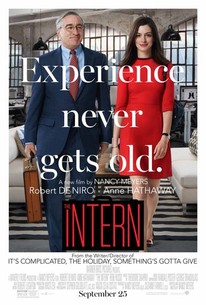 Critics Consensus: The Intern doesn't do enough with its timely premise, but benefits from the unorthodox chemistry of its talented leads.

Critics Consensus: The Intern doesn't do enough with its timely premise, but benefits from the unorthodox chemistry of its talented leads.

Critic Consensus: The Intern doesn't do enough with its timely premise, but benefits from the unorthodox chemistry of its talented leads.

A retired successful business owner and widower lands an internship at a fashion website run by a young, career-driven woman. ~ Jason Buchanan, Rovi

Susie Feldman
as Couple in Elevator

George Merrick
as Businessman at Starbucks

Casey Benjamin
as Mom at School

Ruby Motz
as Child at School

News & Interviews for The Intern

Parental Guidance: How Family-Friendly Are The 5th Wave and The Boy?
Now Streaming: F is for Family Season One, Selma, And More
Box Office: The Martian Zooms Back To Number One

View All The Intern News

Critic Reviews for The Intern

There's something powerful in that, in the simple fact that The Intern is so sympathetic to its older character-so resolutely on the side of a person who might, in other contexts, be dismissed or ignored or, as is so often the case, invisible.

Thanks largely to performances by De Niro and Hathaway, The Intern is a gentle, enjoyable fantasy-and certainly Meyers's best film in more than a decade.

This earnest, effusive haut-bourgeois fantasy, by the writer and director Nancy Meyers, runs roughshod over rational skepticism with the force of her life experience.

Starring in Nancy Meyers' comedy The Intern, is Robert De Niro, improbably cast as an avuncular retiree with a twinkling gaze, an affable -- if slightly twisted -- smile and an abundance of tact.

The Intern is a lavish workplace comedy that asks the question: What would it be like if we caught up with Andy from The Devil Wears Prada a decade later? ... The answer is, to be frank, agony.

I sometimes have a bit of a sweet tooth for Nancy Meyers's Ephron-lite diversions, but this, frankly ... eww.

It seemed kind of sexist.

The Intern presents a heartfelt multi-generational story without harping too hard on its traditional, yet fun heartfelt tropes.

A well-acted and sometimes moving tale of friendship and life lessons is let down by its own burgeoning desire to appear 'with it'.

Alex Flood
One Room With A View

Robert Deniro and Anne Hathaway are really charming in their roles.

The Intern is very enjoyable and is good at loosening the heartstrings a little. It's not a romance between De Niro and Hathaway (thankfully), but serves its purpose well in being a feel-good, character-driven film.

Audience Reviews for The Intern

Pretty underwhelming. It was okay, but at two hours, wears it's welcome out and has an extremely abrupt ending. I hated the husband twist and I didn't think either of them were convincing as parents to a child that old. At lest it wasn't completely predictable, but once was enough watching this.

Who would have thought that Romantic Comedy star Anne Hathaway would ever be acting alongside Gangster Film star Robert De Niro? "The Intern" stars both of them respectively and say what you will about sappy plots like this, "The Intern" is a very, very good film about life in general. Following a widower as he tries to keep himself busy on a daily basis, not matter what it is, Ben (De Niro) is hired as a senior personal-intern to Jules (Hathaway) at an online fashion website. Fitting right in as he had a very long career in business, they form an offbeat friendship that nobody would have expected. This film truly is about friendship, family, and life in general. That is the main focus and it handles it wonderfully. Giving needed life lessons to the new/younger generation, while still caring about it's older audience, this film balances the old and the new in such an interesting way. Having a young family who clearly doesn't see their father's very much, Ben becomes that figure in their lives and changes it drastically, for better or worse. Everything about this film moves at a very solid pace and you feel like it is giving you a slice of life at this moment in their lives. Where this film falters, is the choices made by some of the characters in the final act. It began to feel a little less like life itself and more like a movie when decisions being made felt like plot devices in order to have the happy/sad ending that it went for. It tries very hard to pull on your heart strings and I did not buy into the emotional impact of the final few scenes as the decisions felt very forced, in my opinion at least. I did not believe that this particular conclusion would have happened in reality, and while the film played out as a very realistic picture, that shift in tone was jarring to me. "The Intern" does benefit from an experience writer in this genre, which is why most of the film is so great. Nancy Meyers writes and directs this film, and while her earlier films such as "Father of the Bride, The Parent Trap, or "The Holiday" have all been enjoyable, films later in her career such as "Father of the Bride 2" or "It's Complicated" really hurt her pedestal. Thankfully, this film has put Meyers back in the spotlight and I look forward to see more of her work in the future. With all the right feel good moments, compelling character developing scenes, and the perfect amount of levity between young and old characters, "The Intern" is a far better movie than it should be and I highly recommend it. Very solid entertainment.

Pop publications have pondered what makes Anne Hathaway so annoying. She's a perfectly beautiful and talented actress, but there's something about her that just smacks of trying too hard. Why the public prefers cool, calculated nonchalance over effusive ambition to please is an argument (perhaps loaded with gender politics) for another day, but suffice it to say, Anne Hathaway is a little bit annoying in this movie. She tries to be cool and calculated, as per Jules, her character - a self-made internet entrepreneur - but when Jules meets the titular intern, Ben, and lets that bosswoman exterior fall and starts hanging out with her dopey underlings, Hathaway (not the character) tries to be "one of the boys" and the performance fails. Her buzzed rant lamenting the manboys' sloppy workplace attire rings false, trite, whiney, and patriarchal. That may also be the script's fault for creating a flat gentleman hero of yore to act as Jules's foil and to be put on a pedestal as the classic man all men should strive to be. For a movie about a woman in a man's world, written and directed by a woman, it defaults to the crutch of "behind every great woman is a greater-yet-not-flashy-about-it man who allows her to blossom into the powerful, great woman she has the potential to be." It just happens to be cute because Ben is thirty years her senior and is more a father figure than a romantic interest. Regardless, this movie is like the Anne Hathaway conundrum. It's cute but annoying. It has the potential to challenge the incessant questions kick-butt actresses and female CEOs are asked about balancing home and work, but it doesn't. It has the potential to question why go-getting women like Anne Hathaway are thought of as annoying or fake, but it doesn't.

At its surface there isn't anything new about this Nancy Meyers helmed film. There's the figurehead of the strong, difficult, woman in charge, and the comparative, mature, father figure. There's fashion, sexual politics, and the beauty of Brooklyn brownstones but not a lot else. Robert De Niro is the eponymous intern who has nothing better to do than work in a senior program after being a company man much of his life. Widowed and without much to do, he becomes indispensable to a harried woman trying to run her own company in the midst of chaos both professionally and domestically. I buy that Ben (De Niro) is a professional, and someone with a bit of class, but it never becomes clear how he is so affable and sensitive to the trappings of Hathaway's character. The plot occasionally suffers because Ben isn't a fully thought out character. He tells people to be truthful, but then breaks into a house rather than have Jules (Hathaway) talk to her mother. He tells his co-workers to be polite and treat women with respect and then watches one of them use an emotional moment for leverage in woo-ing a female co-worker. The plot ricochets around without truly understanding its characters and the ending feels a little anticlimactic because of it. The central conflict doesn't come until near the end, and there's so central villain or antagonist to the film. Most of the conflict comes from Jules' marriage, and that just shouldn't be the central premise of a film in this day and age, especially when it's tacked on at the end. If there was a better conflict this could have been a more heartfelt film.