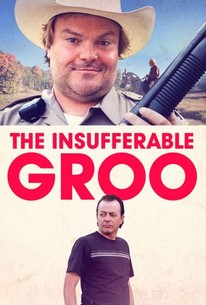 The film follows Groo as he tries to woo and cast Jack Black as the sheriff in his film. With no permits, little money, and volunteer actors, Groo's yearlong production encounters problems that threaten to shut it down daily. But finally, in a surreal moment, Jack Black agrees to be in Groo's movie. Groo drives to Los Angeles to film and direct Jack as he plays a small-town sheriff trying to take down the rogue elf in 'The Unexpected Race.' But since the finish of his masterpiece, Groo finds himself still seeking for distribution and a chance to make it big.

Critic Reviews for The Insufferable Groo

May leave many viewers wishing Groo would pawn his camera and let someone boss him around for a change.

If anything, The Insufferable Groo will make you reconsider your commitment to whatever your passions are.

Groo's dedication to filmmaking is admirable, and Christopherson presents that in a well-crafted documentary that's an easily recommended watch.

An endearing and often funny profile of an amateur filmmaker who's equally as inspiring as he is narcissistic.

The result is entertaining and intriguing up to a point but, like Groo's films, a little of it goes a long way.

There are no featured reviews for The Insufferable Groo at this time.