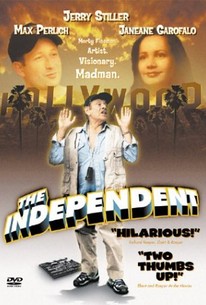 Imaginary Z-grade 1960s exploitation film producer Morty Fineman (Jerry Stiller), who was responsible for such faux-works as Buddy Cops V: Hayseed and Toughnut, sci-fi blaxploitation flick The Foxy Chocolate Robot, and, of course, Heil Titler , is the focus for this mockumentary co-written and directed by Stephen Kessler). While Fineman struggles to make his latest effort, Ms. Kevorkian, about a gun-toting babe who's passionate about assisted-suicide, the bank wants to foreclose on his hallowed studio and sell his film archive for $8 a pound. In absolute desperation, he reaches out to his estranged daughter Paloma (Janeane Garofalo), who grudgingly agrees to be the president of his production company in spite of numerous moral qualms. Along the way, the film features interviews with such real-life luminaries as Peter Bogdanovich, Roger Corman, and blaxploitation stalwart Fred Williamson, that paints a picture of a relentlessly gung-ho producer whose work somehow manages to rise above nothing budgets and lackluster talent. They also highlight Fineman's penchant for hitting on his leading ladies; Karen Black recalled one incident by noting, "It helped to be drunk." This film was screened at the 2000 South By Southwest Film Festival.

Roger Corman
as Himself

Ted Demme
as Himself

Karen Black
as Herself

Ron Howard
as Himself

Peter Bogdanovich
as Himself

Fred Williamson
as Himself

Nick Cassavetes
as Himself

Clanton Williams
as Businessman No. 1

Joseph Dubow
as Businessman No. 2

Penelope Pumpkins
as Actress No. 1

Brooke Ashley
as Actress No. 2

Brittany Andrews
as Actress No. 3

Ancel Cook
as Peter Worth

Critic Reviews for The Independent

When it's trying to be a more conventional comedy, it's mostly pretty bad.

A charming and funny look at the independent filmmaking business and the thin line between a masterpiece and a $9 nap.

Good but not great.

While [Stiller] and everyone else look like they're having a great time working on a shoestring, their movie too often retells the same joke.

A mockumentary that is as endearing as it is silly.

Garofalo, wary but indulgent as the director's estranged daughter, has great comic rapport with Stiller.

Stiller should get an Oscar for his performance as Fineman and that's no joke. This is a role of a lifetime and Stiller relishes the opportunity.

Really, truly, one of the funniest movies of the last decade.

has enough raw talent to elevate it above the usual mockufare

Now this is what I'm talking about right here. We need more films like THIS!

A lot of fun, thanks in no small part to the wonderfully over the top performance of Jerry Stiller

Hollywood loves to satirize itself, wanting to reassure us it doesn't take itself too seriously. The Independent is worlds away from The Player (1992), but it's still one joke hammered over and over, hitting more often than missing.

Audience Reviews for The Independent

I think that Jerry Stiller has one of the best comedic performances ever here.

It's just plain stupid in every sense of the word, but Stiller is hilarious and the film exceeds any expectations. The scene where the reporter is interviewing Stiller and asking him about his career is one of the funniest scenes I've ever seen.

Comedy with Jerry Stiller as a B-movie director known for his "interesting" films. When he decides he wants to make a new film about a serial killer's life he finds he's skint, so,along with the help of his daughter and long suffering assistant, he tries to get people's interest back into his work by trying to get a company to screen his films at a film festival. Obviously, this proves difficult due to a cult-ish, and limited audience.I have to admit, until i spotted this in a budget store the other day,i'd never heard of The Independent,but i was just about pleasantly suprised as this has some funny moments,the cast is good and its a pretty good story to. Not brilliant but pretty cool.