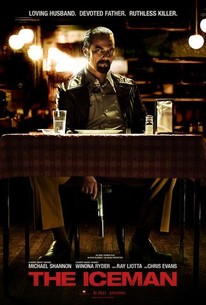 Critics Consensus: While it deserved stronger direction and a more fully realized script, Michael Shannon's riveting performance in the title role is more than enough to make The Iceman recommended viewing.

Critics Consensus: While it deserved stronger direction and a more fully realized script, Michael Shannon's riveting performance in the title role is more than enough to make The Iceman recommended viewing.

Critic Consensus: While it deserved stronger direction and a more fully realized script, Michael Shannon's riveting performance in the title role is more than enough to make The Iceman recommended viewing.

Inspired by actual events, The Iceman follows notorious contract killer Richard Kuklinski (Academy Award (R) nominee Michael Shannon) from his early days in the mob until his arrest for the murder of more than 100 men. Appearing to be living the American dream as a devoted husband and father; in reality Kuklinski was a ruthless killer-for-hire. When finally arrested in 1986, neither his wife nor daughters have any clue about his real profession.(c) Millennium

News & Interviews for The Iceman

View All The Iceman News

Critic Reviews for The Iceman

The Iceman is like a gangster's cold locker: all the nutritive items have been taken out to make room for the dead bodies.

Nothing else in Ariel Vromen's movie is remotely on Shannon's level, from the plodding, Scorsese-clone script to the needlessly lifeless editing and cinematography.

Suspect barnets aside, there's not a lot to take away from this by-the-numbers genre piece.

Even the always-watchable Shannon can't give much life to Kuklinski's two-dimensional presence: he's little more than a series of murders and pained looks.

Shannon gets at his character's pent-up torment as well as his efficient disconnect. When his two worlds start to converge -- on his daughter's sweet 16th birthday, no less -- you feel for him.

A true-crime thriller directed with grit, gristle and punchy energy by Ariel Vromen, The Iceman is never less than fascinating, even if things get a little ham-fisted here and there.

In a vacuum, this is some of Shannon's finest work. It's unfortunate the film isn't as good as he is.

Who cares if the story makes sense, because Michael Shannon can carry it, right? He can, but only so far.

The Iceman -- so slick, so smooth, it will send a chill through your veins.

The Iceman is undeniably Shannon's film, and his performance is at once both powerful and nuanced.

Vromen's The Iceman will leave audiences cold with its chilling account...a delightfully probing and perverse exposition about a complex character study of an unstable man set loose among the masses thus becoming our wildest harsh reality imaginable.

There's no denying The Iceman features an eye-catching performance from Michael Shannon... or that director Ariel Vromen imparts a confident style, but we have seen this true-life sort of thing many times before.

Audience Reviews for The Iceman

Really good account of the real life mob hit man Richard Kuklinski aka "The Iceman". Michael Shannon excels! He has risen on my list of favorite actors...he really captures the conflict between the concerned family man, and the ruthless brutal killer in this film. There are many other small parts by some rather famous faces, which was quite fun to pick out. Very well done film....

Based on actual events, this is a dramatization of the life and career of Richard Kuklinski- one of America's most notorious contract killers. Over the course of a few decades, the ruthlessly cold blooded Kuklinski claimed to have killed over 100 people. As fascinating as this is, he also managed to maintain a double life almost flawlessly (until he finally got pinched). When he wasn't out killing people, Kuklinski was a feverishly devoted husband and family man, keeping the dark half of his life secret until it was too late. This film focuses on the heyday of Kuklinski's life and career, starting with his humble beginnings as a man who dubbed porn movies, and moving to his career as an ice cold killer until he finally got busted in the mid 1980s. There's a lot of condensation of the story, and plenty of omissions, but hey, when the film's only 105 minutes long, stuff has to be left out, unfortunately. The film does hit the highlights though, and gets the point across, but I wanted more. I would have loved it had this been about 20-25 minutes longer, with more scenes of character development, story, and more scenes of people getting whacked. Call me a sicko, but if you're film's gonna ape from masters like Scorsese, you should probably go all the way or not at all. This is a well made product, no doubt, but it really doesn't offer as much insight or depth, and that's a bummer since the real story and man are so fascinating. Michael Shannon is solid as Kuklinski, and he's back by an equally sterling supporting cast that includes Winona Ryder, Ray Liotta, a scene stealing Chris Evans, an atypical turn from David Schwimmer, and all too brief cameos from Stephen Dorff and (even more memorably) James Franco. I had my issues and disappointments here, but, while this film is rather bare bones, it's still watchable, so sure, you might want to give this a look. Just don't expect the whole to equal the sum of the parts.

Loving husband. Devoted father. Ruthless killer. Decently good mob drama! Michael Shannon giving a strong performance as the hit-man with the calculating and creepy demeanor of a psychopathic killer with no conscience who can still flip the switch back to his life in the suburbs with wife and kids. Ray Liotta a can't miss as a minor mob boss, all the acting first rate and the characters real. But the Iceman story is told without ice and without chasers, a gangster flick without sentiments real or phony thrown in. Viewers hoping to draw insights or conclusions from all the dead bodies might end up disappointed. It is a strong cast but a very plodding script that burns out after about 45 minutes. Were it not for the cast, the final judgment of the film would be dyspeptic. In the 1960s, Richard Kuklinski is working as a porn film lab tech until his mob bosses persuade him to change his career into that of a contract killer. For years, Kuklinski gains a reputation for cold blooded professionalism even as he raises a family who are kept in the dark about his true career. Unfortunately, mob politics ultimately forces him to secretly work independently with the psychopathic Robert 'Mr. Freezy' Pronge. As much as Kuklinski tries to keep his lives separate, circumstances and his own weaknesses threaten a terrible collision as the consequences of his choices finally catch up to him.