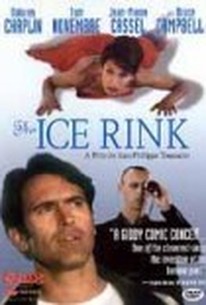 Acclaimed Belgian novelist Jean-Philippe Toussaint drew attention to his directorial talents in 1990 with a remarkable satire on modern life, Monsieur. His third feature, La Patinoire, is about a film director who is shooting a highly symbolic film called 'Dolores' at an ice rink. He has hired a Lithuanian ice hockey team with which he is having enormous communication problems. His actors all have inflated egos, his film crew is made up of fools, and there is a politician on his back. But he must finish the film, no matter what, in time for the Venice Film Festival. A black comedy which is applicable to all absurd situations of life, but particularly those associated with the film industry, La Patinoire is a clever satire from beginning to end, including its title. ~ Gönül Dönmez-Colin, Rovi

Tom Novembre
as The Director

Mireille Perrier
as The Assistant

Dolores Chaplin
as The Actress

Bruce Campbell
as The Actor

Marie-France Pisier
as The Producer

Dominique Deruddere
as The Director Of Photography

Gilbert Melki
as The Stuntman
View All

Critic Reviews for The Ice Rink

Even members of Bruce Campbell's rabid cult following will probably want to wait for this one as a cheap rental.

Consistently lighthearted and amusing, but rarely takes full advantage of its setting or subject matter.

Audience Reviews for The Ice Rink

There are no featured audience reviews yet. Click the link below to see what others say about The Ice Rink!