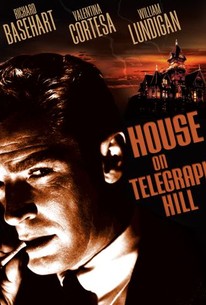 After surviving the hell of a Nazi death camp, a refugee faces even greater dangers in America in this tale of murder, deceit, and assumed identities. Victoria Kopwelska (Valentina Cortese) is a Polish woman imprisoned in a Nazi concentration camp near the end of World War II. Desperate to survive, Victoria learns that her best friend has family in the United States, and if they are ever freed, she pledges to take Victoria to America with her. Victoria's friend, however, is killed shortly before American troops can liberate the camp. With nowhere to go, Victoria steals her friend's papers and sails to America, where she is accepted as her friend by her family. Victoria learns that she is now the godmother to a young boy, as well as the heir to a sizable fortune, following the death of her "aunt." Alan Spender (Richard Basehart), the boy's guardian, has been making secret plans to get his hands on the money, and Victoria's arrival causes him to draft a new scheme. Alan begins wooing Victoria, hoping to take her hand in marriage and then murder her, gaining her estate in the process. However, after several accidents befall the youngster, Victoria begins to believe that her new sweetheart is up to no good. The House on Telegraph Hill was directed by Robert Wise, who went on to helm such blockbusters as West Side Story and The Sound of Music. ~ Mark Deming, Rovi

Charles Wagenheim
as Man At Accident

Critic Reviews for The House on Telegraph Hill

Audience Reviews for The House on Telegraph Hill

Nice Robert Wise film noir. Combines WWII holocaust backstory with a thrilling 'who-dunnit' mystery. Valentina Cortese is wonderful as the young Polish girl who survives a German death camp only to face more peril in the hills of San Francisco.

Solid suspenser with good performances from the two female leads and excellent cinematography.

The House on Telegraph Hill Quotes