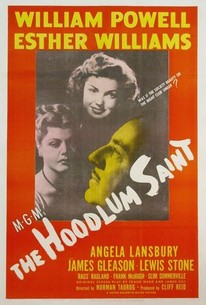 William Powell plays a cynical con man who graduates from penny-ante operations to a big-time charity racket. The scam involves collecting money on behalf of St. Dismas, bringing Powell in close contact with several men of the cloth. As the racket rolls on, Powell is touched by the sincerity of the religious men and the plights of the charity's rightful recipients. He has a change of heart, confessing his original criminal intentions but seeing to it that the money goes to the right people. Hoodlum Saint was typical of the facile religiosity often found in MGM pictures of the period. The film is best remembered as the first non-aquatic performance of MGM swimming star Esther Williams. ~ Hal Erickson, Rovi

Will Wright
as Allan Smith

William A. Janssen
as Mugg

William B. Davidson
as Annoyed Man

Roy Butler
as Board Executive

Tom Leffingwell
as Board Executive

Walter Bacon
as Board Executive

Hope Landin
as Mae, the Spinster

Critic Reviews for The Hoodlum Saint

There are no critic reviews yet for The Hoodlum Saint. Keep checking Rotten Tomatoes for updates!

There are no featured reviews for The Hoodlum Saint at this time.