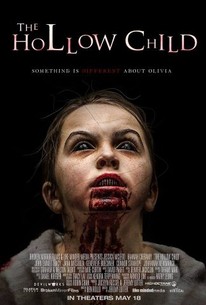 Troubled teen Samantha's position in her new foster family is jeopardized when her new sister Olivia goes missing in the woods, only to reappear, apparently unharmed, days later. But when Sam begins to suspect that what emerged from the woods is not Olivia, her investigation will bring her face to face with an evil presence which has haunted the town for generations.

Critic Reviews for The Hollow Child

The Hollow Child is a horror movie that reproduces many clichés, formulas, and predictable strategies that alienate the viewer from the emotions and tribulations the protagonist experiences. [Full Review in Spanish]

A confident, multi-layered film which makes highly effective use of simple cinematic techniques to forge a connection with the primal, The Hollow Child is a further sign that the growing Raven Banner brand is one worth looking out for.

Whilst it may not be destined to set the box-office alight - and will probably find its place on streaming and cable channels, The Hollow Child is a passably diverting supernatural thriller and a film with talent to watch out for in the future.

McLeod's performance is as much a highlight as the spooky spirit Lutter conjures, enhanced by Nelson and Graham Talbot's striking cinematography and David Parfit's sinister score.

Audience Reviews for The Hollow Child