The Hobbit: An Unexpected Journey2012

The Hobbit: An Unexpected Journey (2012) 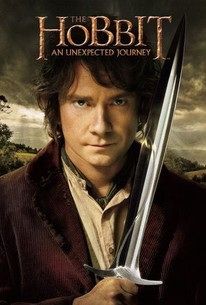 Critics Consensus: Peter Jackson's return to Middle-earth is an earnest, visually resplendent trip, but the film's deliberate pace robs the material of some of its majesty.

Critics Consensus: Peter Jackson's return to Middle-earth is an earnest, visually resplendent trip, but the film's deliberate pace robs the material of some of its majesty.

Critic Consensus: Peter Jackson's return to Middle-earth is an earnest, visually resplendent trip, but the film's deliberate pace robs the material of some of its majesty.

The Hobbit: An Unexpected Journey Photos

The Hobbit: An Unexpected Journey follows title character Bilbo Baggins, who is swept into an epic quest to reclaim the lost Dwarf Kingdom of Erebor, which was long ago conquered by the dragon Smaug. Approached out of the blue by the wizard Gandalf the Grey, Bilbo finds himself joining a company of thirteen dwarves led by the legendary warrior Thorin Oakenshield. Although their goal lies to the East and the wastelands of the Lonely Mountain, first they must escape the goblin tunnels, where Bilbo meets the creature that will change his life forever... Gollum. Here, alone with Gollum, on the shores of an underground lake, the unassuming Bilbo Baggins not only discovers depths ofguile and courage that surprise even him, he also gains possession of Gollum's "precious" ...a simple, gold ring that is tied to the fate of all Middle-earth in ways Bilbo cannot begin to know. -- (C) Warner Bros

News & Interviews for The Hobbit: An Unexpected Journey

Know Your Critic: Bilge Ebiri, Movie Critic at Vulture
Lord of the Rings Vs. Harry Potter: The Ultimate Fantasy Franchise Face-Off
The 50 Highest-Grossing Movies of All Time: Your Top Box Office Earners Ever Worldwide

View All The Hobbit: An Unexpected Journey News

Critic Reviews for The Hobbit: An Unexpected Journey

It frequently seems as though Jackson was less interested in making The Hobbit than in remaking his own fabulously successful Lord of the Rings series.

My first thought in watching The Hobbit was: Do we really need this movie? It was my last thought, too.

To its own narrative detriment, "The Hobbit" works hard to lay the framework for what will follow. Certainly that's one way to set out on a trilogy, but it's surely not the best.

There's no denying the majesty in Peter Jackson's visuals but he's taken a relatively slim children's book and stretched it beyond the limits.

Jackson has delivered plenty more of the big setpieces that fans loved in the trilogy, albeit at the cost of making The Hobbit far more imperial and epic than it needs to be.

The repeated iterations of fight, flight and respite here get wearing. Especially perhaps because, with Jackson's fetish for detail, they take more time to watch on screen than to read about.

In the end you're left wondering how it went that way, and how in the hell are they going to squeeze two more movies out of this?

The Hobbit: An Unexpected Journey is an expected journey that radiates entertainment, majesty and wonder. [Full review in Spanish]

While it doesn't have the same sense of urgency and darkness as the LOTR trilogy, An Unexpected Journey is a fun and welcomed adventure, filled with humor, spectacular visuals and great action sequences. [Full review in Spanish]

Despite a few minor flaws, The Hobbit: An Unexpected Journey is a superb (and suitably epic) addition to Peter Jackson's past adaptations of Tolkien's work. See it in 3D and 48fps for the ultimate experience.

It feels more scattershot than Jackson's prior films, a pastiche of set pieces that don't add up to a unified story.

It feels much like a gentler, more humorous and watered-down version of The Fellowship of the Ring.

Audience Reviews for The Hobbit: An Unexpected Journey

There is so much to love about "The Hobbit: An Unexpected Journey," and sometimes that particular fact overshadows what are a few minor problems with the film. It is a simple story, told in a very grand scale, about Dwarfs, accompanied by a Hobbit, who are on a quest to reclaim the Dwarfs homeland. Along the way, he comes across as mysterious ring, and the climax unfolds. This film has a very dark tone to it, with very excessive images, but the things that truly bugs me is the fact that it shifts back and forth from dark to comical too quickly, taking away some of the mood. Still, I highly enjoyed watching this film and the cliffhanger is incredible. I cannot wait for part 2 of this trilogy. It is no match for "The Lord of the Rings" trilogy, but on it's own, it really has something going for it. It was also nice to seem some pretty awesome cameos from familiar faces. Overall, "The Hobbit: An Unexpected Journey" is far from perfect, but definitely earns it's welcome.

The Hobbit: An Unexpected Journey Quotes