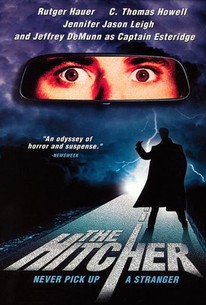 Critics Consensus: Its journey is never quite as revelatory as it could be, but The Hitcher stands as a white-knuckle vision of horror, bolstered by Rutger Hauer's menacing performance.

Critics Consensus: Its journey is never quite as revelatory as it could be, but The Hitcher stands as a white-knuckle vision of horror, bolstered by Rutger Hauer's menacing performance.

Critic Consensus: Its journey is never quite as revelatory as it could be, but The Hitcher stands as a white-knuckle vision of horror, bolstered by Rutger Hauer's menacing performance.

This routine slasher film is greatly enhanced by the ethereal quality of its evocative cinematography and a haunting score that foretells pending doom. Otherwise, the pendulum swings between car crashes and slasher killings all the way through until the predictable end. Jim Halsey (C. Thomas Howell) stops to pick up serial murderer John Ryder (Rutger Hauer) on a long haul through Texas while driving a Cadillac to its destination. Before he gets the car back up to 65 again, Jim realizes he has a wacko for a passenger and throws him out. Revenge is in store as the crazed Ryder starts killing off anyone Jim meets along his way. Desperate for help, Jim's flight from the killer becomes a flight from the police as well, since they think he is responsible for the trail of deaths that follow in his wake.

Critic Reviews for The Hitcher

This set-up is intriguing, and you wish director Robert Harmon had made more of it.

A highly unimaginative slasher that keeps the tension going with a massacre about every 15 minutes.

It's a highly competent sick-fright version of the evergreen chase formula.

Mr. Hauer, who has reportedly vowed not to play any more villains or crackpots, is probably making the right decision, if this is any measure of the sort of role that comes his way.

I would have admired it more if it had found the courage to acknowledge the real relationship it was portraying between Howell and Rutger, but no: It prefers to disguise itself as a violent thriller, and on that level it is reprehensible.

Despite the fact that The Hitcher is both conventional and ultimately hollow, it does take the viewer for a terrifying ride.

A cosmic horror film drawn out of a psychological thriller.

That kind of nonstop self-seriousness should wear thin after a while but director Robert Harmon makes the screenplay's unabashed cruelty more potent than churlish.

An uncanny frisson, plus a road of endless curves

Feature debuts don't come much better than director Robert Harmon and screenwriter Eric Red's sleek, dream-like thriller about a naïve college boy who crosses paths with devil in the flesh after taking a wrong turn on some lost highway.

Without the original film's subtext of male bonding gone awry, nothing here has a shred of psychological resonance.

Audience Reviews for The Hitcher

In 'Halloween', Michael Myers was simply credited as The Shape because the viewers would project their own ideas of horror onto his amorphous face. In many respects, John Ryder is similar to Myers insofar as he is an oppressive, omnipresent villain without a motive. He appears spontaneously (one example of hysterically irrational gallows humor is his materialization in the back of a family's station wagon) and he could be construed as the personification of Jim's coming-of-age obstacles on the road to manhood. 'The Hitcher' is a taut, exquisitely surreal B-movie with a powerhouse performance from Hauer. At first, Hauer is bedraggled from the rain, sniffling with a cold and intentionally vague about his destination. He unveils his switchblade and almost pleads to Jim "I want you to stop me". Their relationship is like the symbiotic link between the host and a virus with each one goading the other. Every time they rendezvous, Ryder provokes Jim to shoot him but Jim is too sheepish and cowardly. At an abandoned garage, Ryder could easily disembowel Jim but instead he throws him his keys as if to enable Jim to continue the cat-and-mouse pursuit. Hauer is fraught with ambiguous touches such as when he lays next to Nash and slightly whimpers before he cuddles with her. 'The Hitcher' has been enshrined as an unsung gem in 80's horror and based on the evidence, deservedly so.

This was an amazing thrill ride one of the best ive ever seen. Rutger Hauer is awesome in this role.