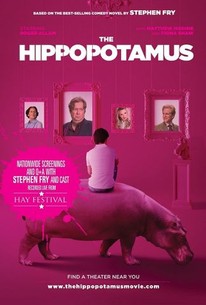 News & Interviews for The Hippopotamus

View All The Hippopotamus News

Critic Reviews for The Hippopotamus

A towering, at times monumentally good central performance from the character actor Roger Allam stands at the heart of The Hippopotamus, but it is entirely alone.

It's still a pleasure, and often a joy, to watch the star measuring out and savouring Fry's rich wordplay like fingers of scotch.

The writing here is sometimes arch and laboured but Allam puts across even the most stilted lines with enormous brio.

This adaptation of Stephen Fry's comic novel relies so heavily on voiceover that it's practically an audiobook.

Sex, alcohol and a generous helping of four-letter invective all feature in a comedy-drama somewhat over-reliant on large gobbets of fruity narration and totally indebted to Allam's stand-out turn.

The rest of the supporting characters are little more than targets of Wallace's diatribes. That's not to say that the A plot lacks appeal. But Wallace is, without a doubt, the star of the show.

This British satirical comedy may be a bit of a mess, but since it's based on a Stephen Fry novel, the snappy wit in the dialogue zings with his specific brand of intelligent humour.

This adaptation of Stephen Fry's novel leans heavily on the elegant profanity of the source material.

Despite a wonderfully witty voiceover and the bullish playing of a willing ensemble, this bawdy romp consistently stumbles over its more contrived excesses.

An old-fashioned romp through the eccentricities of the upper classes, it's a fun mystery with a nicely filthy mind.

Brought to the silver screen by director John Jencks, the flavour and indelible, idiosyncratic tone of the author is imbued in this faithful adaptation.

Audience Reviews for The Hippopotamus

Different, intelligent, and refreshing, but very weird. The credits are pink, suggesting a light-hearted chick-flick film, but it didn't quite match the tone of this movie. Ted, an old fart of a man, is a washed-up cynical poet and a drunk who surprisingly has a superior attitude. He's a total British snob who was once a famous poet, but hasn't written a poem in years. When the movie begins, Ted works as a theatre critic, but is rude and mouths off to his boss. Thus, his boss fires him. A pretty young woman (daughter of a woman who Ted had a past relationship with) pays him handsomely to find a cure for her leukemia at a relative's lush estate where his godson resides. Ted's godson, David, (an odd but sweet 16-year-old boy), is thought to be able to cure people with his hands, an idea that Ted scorns. The movie shows the relationship between Ted, his godson, and the people who reside in the mansion, some of who lost favor with Ted years ago, with good reason. Ted is despicable. I was curious about the boy, the godson, and this kept me watching. The boy adored Ted even though Ted discarded and neglected his grandson. I also liked the older dark-haired woman who actually liked Ted, the lady who had asthma. I thought she was the best actor/actress in the film. Sometimes funny, often quirky and off-beat, this unusual film kept my interest, despite my Ted being an unlikable and grotesque character.