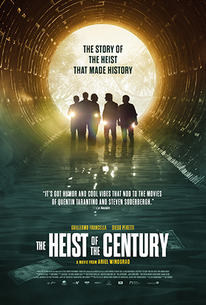 Based on true events from over a decade ago, a group of thieves perform what is considered one of the most famous bank heists in the history of Argentina. When the police raid a bank hostage situation, they are perplexed to find toy weapons, scared hostages and empty bank vaults, but oddly enough there is no sign of the money nor the bank thieves. Months later, the wife of one of the thieves takes revenge on her unfaithful husband by turning in all six members involved in the crime. One by one they get caught by the authorities but the money is never uncovered. Was the scorned wife's confession a crack in the perfect plan or was this another intricate element of the Heist of the Century?

A great addition to the genre. [Full review in Spanish]

[Director Ariel] Winograd and his team reconstructed with notable realism and credibility every detail of one of the most spectacular heists in the criminal history of Argentina. [Full Review in Spanish]

There are no featured reviews for The Heist of the Century (El robo del siglo) at this time.

The Heist of the Century (El robo del siglo) Quotes