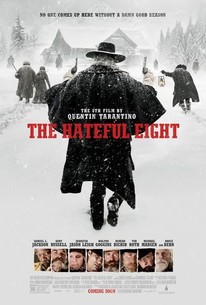 Critics Consensus: The Hateful Eight offers another well-aimed round from Quentin Tarantino's signature blend of action, humor, and over-the-top violence -- all while demonstrating an even stronger grip on his filmmaking craft.

Critics Consensus: The Hateful Eight offers another well-aimed round from Quentin Tarantino's signature blend of action, humor, and over-the-top violence -- all while demonstrating an even stronger grip on his filmmaking craft.

Critic Consensus: The Hateful Eight offers another well-aimed round from Quentin Tarantino's signature blend of action, humor, and over-the-top violence -- all while demonstrating an even stronger grip on his filmmaking craft.

Set six or eight or twelve years after the Civil War, a stagecoach hurtles through the wintry Wyoming landscape. The passengers, bounty hunter John Ruth and his fugitive Daisy Domergue, race towards the town of Red Rock where Ruth, known in these parts as "The Hangman," will bring Domergue to justice. Along the road, they encounter two strangers: Major Marquis Warren, a black former union soldier turned infamous bounty hunter, and Chris Mannix, a southern renegade who claims to be the town's new Sheriff. Losing their lead on the blizzard, Ruth, Domergue, Warren and Mannix seek refuge at Minnie's Haberdashery, a stagecoach stopover on a mountain pass. When they arrive at Minnie's, they are greeted not by the proprietor but by four unfamiliar faces. Bob, who's taking care of Minnie's while she's visiting her mother, is holed up with Oswaldo Mobray, the hangman of Red Rock, cow-puncher Joe Gage (Madsen), and Confederate General Sanford Smithers. As the storm overtakes the mountainside stopover, our eight travelers come to learn they may not make it to Red Rock after all...

News & Interviews for The Hateful Eight

View All The Hateful Eight News

Critic Reviews for The Hateful Eight

The Hateful Eight often feels more like a sadistic stage play than a movie. [Full review in Japanese]

It's surely the bleakest film of Tarantino's career, pronouncing a bitter verdict not only on America's past, but its present and future as well.

A deeply conflicting version of fun.

It's mannered, grandiose and self-indulgent, but in its own way absolutely expert. Aesthetic, even, if you like that.

Tarantino has returned to his first film's template - colourful characters, a single room, blood and betrayal - but this time in a framework that is deliberately designed for repeat viewing.

Quentin Tarantino's The Hateful Eight is a lot of things. Boring, of course, isn't one of them.

Tarantino has created a highly immersive world populated by fully fleshed-out characters, but he's also made a movie that's incredibly cruel. The third act, in particular, is chock full of cruelty...

There are a hundred reasons why a three-hour widescreen epic that devolves into an Agatha Christie play shouldn't work, and yet... The Hateful Eight comes off as more satisfying than Inglourious Basterds or Django Unchained.

The Hateful Eight still stands head and shoulders above most other fare on offer in cinemas right now, and it's a worthy addition to the Tarantino library.

It takes something special like a Tarantino film to relive that trembling magic of the cinema.

The Hateful Eight is ambitious, complex yet wildly entertaining. For a 187-minute film, it's worth it.

The Hateful Eight contains the traditional Tarantino values of racism, violence, and controversy but sets itself apart with brilliant cinematography and classic, mysterious story-telling.

Audience Reviews for The Hateful Eight

A bounty hunter, his charge, and other sundry characters are stuck in a cabin. About an hour and a half of this nearly three-hour film is absolutely useless; the film could've started in the cabin and lost nothing, yet there is a long sequence of getting to the cabin and an equally pointless flashback scene that only adds a character inconsistency (if the owner of the cabin is so racist against Mexicans, why doesn't she mention it in the flashback?). And there's a useless voice-over, stupid chapter breaks, dumb monologues, and just a bunch of shit. Tarantino jerks off to visually striking panoramas, and it's just adorable that he gets to play with his new 70 mm toy. Overall, see this film only to see the absolute nadir of a once-great director's career (unless you count Kill Bill Vol. 1, which might be worse).

Waste of 65 except for the establishing shots.

How can anyone be so hateful with such a cinematically beautiful film? As one expects from a Tarantino film, "The Hateful Eight" is an over-the-top bloodbath, humorous in its depravity. However, it's mostly well-acted (ahem! Channing Tatum) with an engaging and unconventional mystery -- so hopefully one can excuse the Tarantinine excesses. It's good entertainment and purdy to look at, so I recon it's worth your while.