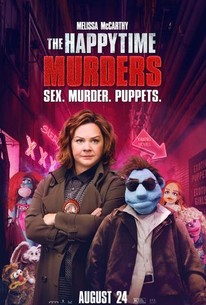 Critics Consensus: The Happytime Murders wastes its intriguingly transgressive premise on a witless comedy that blindly pushes buttons instead of attempting to tell an entertaining story.

Critics Consensus: The Happytime Murders wastes its intriguingly transgressive premise on a witless comedy that blindly pushes buttons instead of attempting to tell an entertaining story.

Critic Consensus: The Happytime Murders wastes its intriguingly transgressive premise on a witless comedy that blindly pushes buttons instead of attempting to tell an entertaining story.

No Sesame. All Street. THE HAPPYTIME MURDERS is a filthy comedy set in the seedy underbelly of Los Angeles where puppets and humans coexist. Two clashing detectives with a shared secret, one human (Melissa McCarthy) and one puppet, are forced to work together again to solve the brutal murders of the former cast of a beloved classic puppet television show.

News & Interviews for The Happytime Murders

View All The Happytime Murders News

Critic Reviews for The Happytime Murders

The film is basically a string of variations on the not-that-funny joke of cute puppets saying and doing naughty things.

The connoisseur of filth within me is pleased to report how wonderfully nasty much of the felted proceedings here are to behold.

With multiple scenes of drug-snorting and depraved puppet sex, including an admittedly hilariously drawn-out ejaculation scene...it's worth emphasising that this is definitely not one for the kiddies.

An uproarious time was had by all, seemingly, on set. But there's not much of a party here for the rest of us.

"The Happytime Murders" is, basically, disgusting. But even when it's reprehensible, it's not always bad.

As much as I hem and haw over the entertainment value of the film, it's clear that there is something here worth exploring. Maybe next time.

Puppets have sex, kill each other, curse like sailors and abuse drugs. It's not anywhere near as lurid as it sounds.

Even if it's an hour and a half of the same joke, it's tremendously funny. [Full Review in Spanish]

The end credits feature an enjoyable 80's singalong...the most gratifying three minutes of the movie.

The Happytime Murders delivers the bare minimum of what was promised and can't rightly be considered an outright failure for doing so.

An empty offering of smut and silliness, with half-baked themes and misfired gags in abundance.

Audience Reviews for The Happytime Murders

From Brian Henson comes the raunchy, hard-R comedy The Happytime Murders. Set in a world where humans and puppets live together, grizzled ex-cop turned private detective Phil Philips is forced to team-up with a human cop who used to be his partner when he investigates the murders of several puppets who starred in a family sitcom together. Featuring Melissa McCarthy, Elizabeth Banks, and Maya Rudolph, the cast isn't too bad. The problem is that the script is poorly written and beats to death its one-note joke: afterhours, puppets are dirty sex fiends. Some of the jokes work and the puppetry is incredibly good, but the plot is really thin and the vulgarity is just out of control. A crazy mess, The Happytime Murders goes way over the top, ruining whatever satire the film was going for.

This is a massive disappointment, it won't garner cult status due to the target audience. Meet the Feebles is a cult gem due to the outlandish plot, compared to this film. This could have been a better film, but for some very odd reason they cast McCarthy in a dead scripted movie. The writers lack creativity and its only McCarthy who can bring any true humour, which is a giant shame. The concept was clever and this could have been a dark horse going into 2018, but sadly it is a giant dud. Poor filmmaking and storytelling. Thee are no risks taken by the filmmakers and it lacks characters who are worth watching. Not worth the time to watch. 03/12/2018.

I really didn't know what to expect from The Happytime Murders, and that's why I went to see it. I wasn't sure if I'd be getting Team America or Roger Rabbit, maybe even a combination of the two. Despite the tagline, that the film wasn't suitable for children, I did expect some level of juvenile humor, but I thought if it has a edge to it and if the mystery is somewhat compelling, maybe it would surprise me, it didn't. Much in the same way that Roger Rabbit had humans and toons living together, with an extreme bias against toons, this world has humans and puppets living together, with a bias against puppets. Phil Phillips (Ryan Tran) claim to fame was as the first puppet to be a police officer, but now he's washed up, and it's brother's fame and his TV show, The Happytime Family, that overshadows him. Phil doesn't care about anything anymore until someone starts killing off the Happytime gang, including his brother, that's when he wants back in, even if his human partner, Connie Edwards (Melissa McCarthy) wants nothing to do with him anymore. The tagline said this film was not intended for kids, but I disagree, because that's exactly who this film is intended for. The comedy is nothing but sex and jokes aimed at a very young crowd. There is no way that adults are going to find most of the comedy in this film even remotely funny. As for the "dramatic" side of the story, the mystery isn't such a mystery, it's so simplistic that you'll know before the first murder even happens. But what about the star of the film, Melissa McCarthy? Well, she plays the same role in just about every film doesn't she? Sometimes it works and sometimes it doesn't, here she just adds to the futility of everything. The bottom line on The Happytime murders is that the story is too basic, the backstory is a complete rip off of Roger Rabbit, and the jokes are so low-brow, that I think even Trey Parker and Matt Stone would pass on using them in a similar film. The true joke here is that this film was ever made.