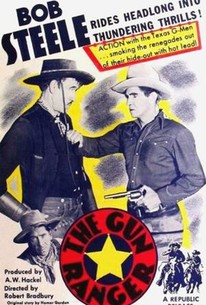 The father-son director/star team of Robert N. Bradbury and Bob Steele are at it again in the low-budget western Gun Ranger. Steele plays Texas Ranger Dan Larson, who throws away his badge when he finds out that the criminals he's collared are using legal loopholes to evade prison. Now a law unto himself, Larson makes it his mission to bring these elusive outlaws to justice -- his way. In keeping with the "singing cowboy" craze, Bob Steele pauses every so often to strum a tune on his guitar, which he does passably well. Produced independently by A. W. Hackel, Gun Ranger was released by Republic.

Horace B. Carpenter
as Joe the Cafe Owner (uncredited)

Critic Reviews for The Gun Ranger

There are no critic reviews yet for The Gun Ranger. Keep checking Rotten Tomatoes for updates!

There are no featured reviews for The Gun Ranger at this time.