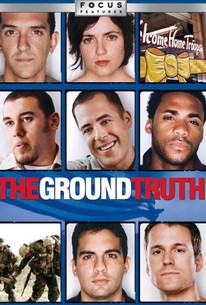 Critics Consensus: The stories the soldiers have to tell are eye-opening and wrenching to hear; collectively it's a searing peek into the toll of war both during and after.

Critics Consensus: The stories the soldiers have to tell are eye-opening and wrenching to hear; collectively it's a searing peek into the toll of war both during and after.

Critic Consensus: The stories the soldiers have to tell are eye-opening and wrenching to hear; collectively it's a searing peek into the toll of war both during and after.

Filmmaker Patricia Foulkrod produced and directed this documentary, designed to shed light on a little examined side of war -- the soldiers who do the fighting. The Ground Truth: The Human Cost of War focuses on the men and women who fought in the War in Iraq, but found themselves largely ignored in the media coverage of the conflict and in their treatment by the military bureaucracy when they came back from the front lines. In extensive interviews with veterans of the Iraq war, these men and women talk about the hardships of war, the danger of serving in a country where the people you defend often consider you the enemy, the onset of post-traumatic stress disorder, the gap between media coverage of the war and the grim realities soldiers see on the battlefield, and the often callous treatment extended to soldiers by military authorities and the Veterans Administration. The Ground Truth was planned with a March 2005 release in mind, in hopes of having the film in theaters in time for the second anniversary of the beginning of the war.

News & Interviews for The Ground Truth

View All The Ground Truth News

Critic Reviews for The Ground Truth

The voices of these brave young people reverberate hauntingly.

Mostly a string of talking-head interviews, but those talking heads -- more than 16 men and women -- are compelling.

It's a haunting and welcome addition to the growing library of war documentaries; one that wisely lets its subjects speak for themselves.

The Ground Truth powerfully documents the human cost of the Iraq war.

It's an edifying, upsetting film that offers a different perspective on the situation in the Middle East.

Those vets certainly deserve to be heard, but virtually every scene of the film tells us something we already knew.

[A]lthough completely one-sided, THE GROUND TRUTH does fill that need and does expose some of that truth. At the very least, THE GROUND TRUTH hits the ground running. Now it's up to the rest of us to help carry the ball.

It leaves you in no doubt of the psychological cost of war.

"The success of The Ground Truth lies in the courageously open and honest interviewees, but it works because of Rob Hall's editing, which not only compiles for us a perfectly evidential collection of footage but does so at a pace that doesn't dilly-dally

This film is effective because it doesn't rely on statistics, but rather interviews with soldiers, interspersed with combat footage.

Audience Reviews for The Ground Truth

Rough to watch but heartfelt and honest.

[font=Century Gothic]The illuminating documentary, "The Ground Truth", reminded me of what a ROTC cadet told me during the First Gulf War - that if you enlist in the armed forces, you may be called on to kill at some point. Let's have no illusions. It is true but only up to a point. A good deal of the veterans returning from Iraq who are interviewed for this documentary(Basically, not the kinds of people that are heard from everyday. Thankfully, no pundits are included. Just a couple of experts.) are National Guard and were not expecting to be stationed there, least of all to be placed in a position to kill civilians. Did the masterminds of this catastrophe have any idea what they were sending these brave soldiers into? Some of whom return missing limbs; others are suffering from Post Traumatic Stress Disorder(PTSD) because of their experiences and for which they do not receive adequate treatment.[/font]