The Ground Beneath My Feet (Der Boden unter den Füssen)

The Ground Beneath My Feet (Der Boden unter den Füssen) (2019) 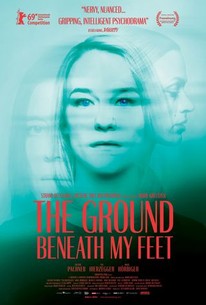 Critics Consensus: The Ground Beneath My Feet tells a thoughtfully layered story with a tense thriller's touch, anchored by a strong performance from Valerie Pachner.

Critics Consensus: The Ground Beneath My Feet tells a thoughtfully layered story with a tense thriller's touch, anchored by a strong performance from Valerie Pachner.

Critic Consensus: The Ground Beneath My Feet tells a thoughtfully layered story with a tense thriller's touch, anchored by a strong performance from Valerie Pachner.

Lola is a jetsetting business consultant who excels at the aggressive tactics and nonstop work her job requires. She travels back and forth from Vienna, where her tasteful apartment serves more as mailbox and laundromat than home, to the headquarters of the latest corporation she's restructuring. Her routine is one of late nights at the office, fancy client dinners and brief nights of sleep in sterile hotel rooms. Approaching 30, Lola is beautiful, works out, and her career seems on a fast track to success. Lola manages her personal life with the same ruthless efficiency she uses to optimize profit margins. She keeps her relationship with her boss Elise secret, as well as the existence of her older sister Conny, who has a long history of mental illness. But when she receives the news that Conny has attempted suicide, Lola's secrets threaten to explode into the open. As she tries to do what's best for her sister without jeopardizing all she's worked so hard for, Lola slowly finds her own grip on reality slipping away.

The Indie Fresh List: Docs on an Infamous Fixer and a Broadcasting Legend Hit Theaters This Week
Once Upon a Time in Hollywood Is Certified Fresh

[An] elegant and mysterious psychological drama...

"The Ground Beneath My Feet" consistently serves as a powerful showcase for the talented Pachner, who manages a performance that is both distant and achingly vulnerable.

The performances are strong and it has a creepy, ominous way of moving along the story that is effective.

In the superbly calibrated new feature from Austrian writer-director Marie Kreutzer, the clash between these opposite approaches to life and work is interpreted as an ambivalent psychological thriller enriched with searing social commentary.

It's as 21st century as portrayals get, and it's a knockout.

While it sometimes dons the characteristics of a psychological thriller, "Ground" eventually unfolds a powerful, metaphor-driven fable, one full of sorrow and anger about the way we live now.

Marie Kreutzer's film - with all its chilly details - is an effective study of a life at breaking point.

The Ground Beneath My Feet has admirable ideas and an intriguing premise at the core of its story, but the execution is sadly flat and lacking in the kind of energy that could have made its unreliable narrator conceit truly compelling.

First-rate Austrian drama is a damning diagnosis of the neurosis at the heart of contemporary society.

It's terrifyingly credible in its depiction of the stress and slog of extreme work pressure.

It's a truly remarkable performance in what is an engaging, tense and ultimately rewarding film.

There are no featured reviews for The Ground Beneath My Feet (Der Boden unter den Füssen) at this time.