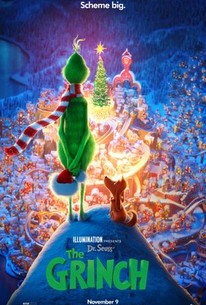 Each year at Christmas they disrupt his tranquil solitude with their increasingly bigger, brighter and louder celebrations. When the Whos declare they are going to make Christmas three times bigger this year, the Grinch realizes there is only one way for him to gain some peace and quiet: he must steal Christmas. To do so, he decides he will pose as Santa Claus on Christmas Eve, even going so far as to trap a lackadaisical misfit reindeer to pull his sleigh. Meanwhile, down in Who-ville, Cindy-Lou Who-a young girl overflowing with holiday cheer-plots with her gang of friends to trap Santa Claus as he makes his Christmas Eve rounds so that she can thank him for help for her overworked single mother. As Christmas approaches, however, her good-natured scheme threatens to collide with the Grinch's more nefarious one. Will Cindy-Lou achieve her goal of finally meeting Santa Claus? Will the Grinch succeed in silencing the Whos' holiday cheer once and for all?

Benedict Cumberbatch
as The Grinch

Rashida Jones
as Donna Lou Who

Cameron Seely
as Cindy-Lou Who

News & Interviews for The Grinch

20 Rotten Christmas Movies We Love
Weekend Box Office Results: Ralph Breaks the Internet Beats The Grinch – But Only Just
The Grinch Star Benedict Cumberbatch on His First Encounter with the Mean One

View All The Grinch News

Critic Reviews for The Grinch

[The Grinch] is excessively well-meaning and very tame. No doubt it will please those who will always love the story, no matter what shape it takes, but you have to be a fan.

It's best for kids and adults who just can't handle the angry, diabolical monster of films past.

The latest animated iteration of Christmas' most famous nemesis might not be strictly necessary, but it's still pretty fun - and revamped just enough to feel fresh.

"The Grinch" is a respectable, if safe, retelling of Dr. Seuss' holiday classic.

You're a Mediocre One, Mr. Grinch. Those expecting Cumberbatch to add a little Dr. Strange to his take on Dr. Seuss will be sorely disappointed as this animated take on the Grinch buries its kid audience under a blanket of bland..

From time to time you'll laugh and maybe shed a tear, but this isn't the kind of Grinch you'll want to see each year.

The Grinch is a good Christmas movie, I guess. It covers all the bases and has a good message but it fails to be as good as other versions because it chooses to do too much.

This adaptation...finds a way to tell the story anew and seeks to provide more depth to the titular Grinch while also expanding Cindy Lou Who's role in the story.

As this is the season for family moviegoing, The Grinch throws its hat in the ring as a solid offering to spend one's hard earned money on.

A full-hearted assault on cynicism - this is a wonderful Christmas film with personality and charm enough to light up the hearts of a thousand Grinches.

A fun family film that is beautifully animated. While not as enjoyable as the tighter-paced classic, the updated graphics can be appreciated.

The Grinch takes a classic short story, adds some pointless plot digressions and then seems to completely miss the point by the end.

Audience Reviews for The Grinch

The Grinch is the usual formulaic animation feature for the holiday season that is family friendly and keeps the kids glued with its sweet and colourful story telling. Definitely can't go wrong with this one.

Dr. Seuss' How the Grinch Stole Christmas is once again adapted for the big-screen, this time as Dr. Seuss' The Grinch, and once again fails to recapture the spirit and magic of the original. The story follows the curmudgeonly Grinch who lives alone in the mountains and avoids Christmas, but his annoyance with Christmas soon turns to anger when the Whos triple their festivities. The film goes to great lengths to set itself apart from previous versions, including changing Seuss' limericks; which is unfortunate as the new ones aren't as charming and poetic. And the filler subplot about Cindy Lou Who is incredibly formulaic and predictable. Also, the soundtrack is rather garish, featuring a lot of pop-music. Dr. Seuss' The Grinch is an improvement over the live-action version, but it has a number of its own problems.

The second go at a twenty-first century feature-length Grinch movie is a thoroughly, spectacularly bland movie. This mediocre enterprise barely stretches to feature length at 86 minutes and it lacks the charm of the original Dr. Seuss cartoon. Benedict Cumberbatch voices the green recluse with his three-sizes-too-small heart set on stealing the Christmas celebration of others. That's great casting, but why is he settling for his Doctor Strange-style American voice? The man has such a natural, rich, velvety voice. Another miscue is the fact that this Grinch isn't really feared by the people of Whoville. He lives just outside of ton and isn't really that mean. He's less a villain and more just a grumpy sad guy who has to over explain everything for the audience to understand ("I thought stealing Christmas would make me feel better, but really I was running from myself..."). This movie is brightly colored and nicely animated but it's strictly just for little kids. The lessons are pretty simplistic. The characters are mostly annoying, precocious, or mute. The humor is mostly slapstick. There is nothing to engage bigger thinkers. This Grinch movie actually made me start re-evaluating the 2000 Ron Howard version, which at least tried something and had an enjoyably hammy Jim Carrey performance with some creepy good makeup prosthetics, and I didn't even like that movie. The new animated Grinch film is inoffensively lackluster. At best it's a disposable 90 minutes to distract easily distractible children and give mom and dad time for a nap. Nate's Grade: C