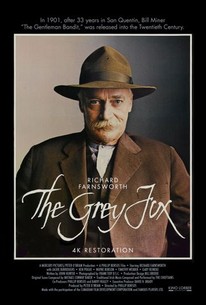 Critics Consensus: The Grey Fox takes liberties with the real-life history that inspired it, but director Philip Borsos' aim is true -- as is Richard Farnsworth's work in the title role.

Critic Consensus: The Grey Fox takes liberties with the real-life history that inspired it, but director Philip Borsos' aim is true -- as is Richard Farnsworth's work in the title role.

Francis Ford Coppola protégé Phillip Borsos directs this elegiac, low-key tale about real-life bandit Bill Miner that has become a classic of Canadian cinema. Having been released from jail in 1901 following a 33-year prison sentence for robbing stagecoaches, Bill Miner (Richard Farnsworth) finds himself living in a society that has completely changed from the one of his youth. He tries to put his life of crime behind him and settle down in Washington state with his sister, but the quiet life does not suit him. He feels restless but uncertain as to how to proceed next. The answer comes to him when he sees Edward S. Porter's The Great Train Robbery. Soon, Miner has slipped over the border into Canada and, along with his new partner, Shorty (Wayne Robson), robs the Canadian Pacific Railway Transcontinental Express. Later, while laying low after the crime in a remote corner of British Columbia, he meets the beautiful, strong-willed photographer Kate Flynn (Jackie Burroughs). In writing this script, Borsos reportedly made heavy use of contemporary court documents and testimonies. This film was screened at the 2001 Toronto Film Festival in honor of its 20th anniversary. ~ Jonathan Crow, Rovi

Thomas Heaton
as Tom
View All

Critic Reviews for The Grey Fox

As drama, the story is genteel to a fault, with nothing provocative or troubling to disturb our enjoyment of the scenery. This limits the achievement. And yet it casts a spell.

Here's one of the loveliest adventures of the year, a movie about a stubborn, indomitable character who robs people because that's what he knows best.

The Grey Fox is sizzling with an indistinct charm in that it's a film that exists on its own terms.

It's an adventure as bountiful as any, set in a world where appreciation and innovation left the Wild West behind, but allowed its sentiments to linger a little while longer.

Beyond its other pleasures, it's also a testament to the talent of first-time feature director Philip Borsos...

The filmmaking is "respectable" almost to a fault. But then the grainy solidity of an image catches and holds us, or Richard Farnsworth says something, it doesn't matter what, and we can't imagine he could be anything less than honest.

The Grey Fox serves as an ideal legacy to these two prodigious talents and also happens to still be a stupendously entertaining film in its own right as well.

Director Phillip Borsos has a fascinating, true story to tell and a creative way to present it.

While not a deconstruction of the western, there is something to be said about this 1982 film working as one that inserts an outlaw into a new world that has outgrown him.

a painterly marvel, the kind of film that presents visual poetry in a way that feels utterly natural, rather than compulsorily "artistic"

Audience Reviews for The Grey Fox

Finally saw it thanks to TIFF's recent 30th anniversary airing. Unfortunately what could be Canada's greatest film is caught up on a poor distribution deal and hadn't been aired in decades. Despite damage to the original film, this one sparkles particularly due to the performances. Farnsworth steals the show as the train robber that we want to see succeed.

one of the great Canadian movies