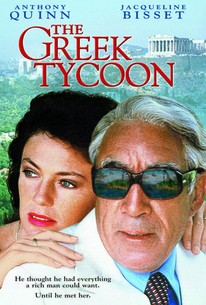 The producers of The Greek Tycoon insisted that their film was not based on any "actual persons, living or dead." Yeh, right. Anthony Quinn stars as Greek shipping-magnate Theo Tomassis, who becomes the second husband of socialite Liz Cassidy (Jacqueline Bisset). It seems that Liz is the widow of young, charismatic American president James Cassidy (James Franciscus), who was felled by an assassin's bullet. When Tomassis marries the former Mrs. Cassidy, it is over the strident protests of his former love, Paola Scotti (Luciana Paluzzi), not to mention the millions of American who consider Liz to be an icon. Too long at 106 minutes, The Greek Tycoon was nonetheless expanded to 112 minutes for home video.

David Masterman
as Clerk
View All

Critic Reviews for The Greek Tycoon

Without Quinn, The Greek Tycoon would be unbearable. But he populates its rubble with a masterful performance.

Need I go on? The movie certainly does.

The movie's version of the relationship between Aristotle Onassis and Jacqueline Kennedy is the most clichéd and superficial, akin to the one the tabloids offer. [Full Review in Spanish]

Audience Reviews for The Greek Tycoon

Blatant ripoff of the Jackie Kennedy/Aristotle Onassis marriage made endurable by Jacqueline Bisset and almost unendurable by Anthony Quinn.