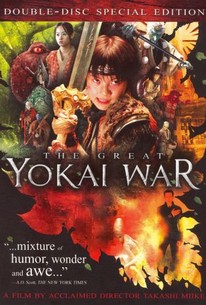 A group of grotesque supernatural creatures from Japanese folklore enlist the aid of a young boy recently bestowed with the title of Kirin Rider in defeating a powerful dark overlord who preys on humans and monsters alike in this kid-friendly fantasy from Takashi Miike. As a series of bizarre supernatural incidents plague the Japanese countryside and scores of children go missing, a mysterious series of mechanical monster attacks led by a dark mistress (Chiaki Kuriyama) sends the country into a panicked frenzy. In the midst of the otherworldly chaos, a young boy named Takashi (Ryunosuke Kamiki) is named Kirin Rider at a rural shrine festival and sent into the hills to claim his sword from the Great Goblin as local legend dictates. Arriving at his destination to find that the mountain is populated by a variety of ghoulish inhabitants visible only to his eye, Takashi pledges to save his new Yokai friends and put an end to the apocalyptic plot set into motion by an evil entity determined to destroy mankind.

Toshiya Nagasawa
as Abe no Seimei

This noisy, effects-crazed PG-13 adventure might work for 10 year-olds who are beyond Nickelodeon piffle and ready for Japanese splatter.

With its scenes of mass destruction in Tokyo and its climactic mushroom cloud, the movie owes a psychic debt to the atomic-monster movies of the 50s and 60s, but its overriding tone is one of endless, giddy invention.

... Miike's epic undertaking is probably best appreciated as the first stab at a live-action version of a Hayao Miyazaki ecologically minded extravaganza like Princess Mononoke.

The film makes no more or less sense than Ridley Scott's Legend or Jim Henson's Labyrinth, and in fact has a creaky, blue-gel '80s-ness to it, but for many, keeping up with Miike's cranked output is an end in itself.

Odd blend of the truly cheesy with a few genuine f/x makes for a cutesy if not exactly thrilling spectacle.

A fanciful dramatisation of children's scary fantasies in impressive puppetry.

The Yokai War, when it finally comes, is pretty near an unmitigated disaster, filled with silly special effects and sillier action.

It's just twisted enough to be worth a look.

At just over two slow-moving hours, this picture might well outlast the narrow audience at which it's aimed-very young kids who can read subtitles quickly.

Its warmth and silliness are distracting enough, even when the plot fails.

Imagine Kwaidan cross-bred with The NeverEnding Story and directed by Terry Gilliam.

2 hours of slow to mid pacing and a few segments of choppy storytelling doesn't work in this film's favor; however, the fantasy piece of the story along with a dash of some Miike abstractness is enough to overcome the disappointments.

The CG fires away in high abundance and it delivers in decent quality. The violence is a tad harsh, which leaves a darker atmosphere then this film initially looks to showcase; maybe not as much of a kid's picture than it seems.

A plethora of overacting matches the wacky characters that show up. Ryuunosuke Kamiki carries the film while Chiaki Kuriyami proves to be a delightful watch. The lovely Mai Takahashi is monotonous, but her outfit makes up for that.

The Great Yokai War gets by with its moments of spirit fun. A check out if the chance arises.

My god how did he go from Making Ichi the Killer "Takashi Miike" to making a children's (Kids) fantasy movie with such bizarre horror yet fantastically photography and elements to do with it. By horror I mean some of the creatures are just so freighting and some are so colourful and alive. I would also like to thank Jesse P for reminding me about this I can easily forget this after watching Spirited Away (because the two films are alike). I must say for the first time we see Miike creative detail come right out of him when he is no dreaming up the most disgusting way to die, these creatures no doubt came from Japanese's mythology (I myself am Korean) to bring this spectacular that no doubt can prove that Miyazaki isn't the only one around with talent. A young boy is moving because of his parents divorce and they stop at a festival where for some reason he is chosen to be a "Kirin Rider" to protect all things that are good. And he himself must lead this war in the spirited world against all things that are evil even though he himself wants nothing to do with it. It is like something Miyazaki would make with all the detail and designs on creatures though its not animated. And I think Miike himself drew all this himself which proves he doesn't have that much of a messed up mind. The creatures them selves are frighting yet some are really amazing looking "but still can be strange" The prove they can act I admit but it isn't always strong most times. The visuals are breathtaking but it always proves that a film doesn't always have to be on CGI. This movie does something different when it comes to that. The last thing I will see is the music really good and I think that's it. Where the hell was this movie when I was young? Come to a close and I say see it if you love this stuff. Still one of the trippiest things i have seen, An acid trip you would fuck you up while watching this.

Don't let the cover fool you, or even the source material, this is far from being the usual family friendly flick. It' s far more rewarding from what most people would think. Once you see pass some of the cheesy effects and the slow parts you'll find that the film has more brains, guts and creativity than all those by-the-numbers-kiddy-friendly fantasy flicks that hollywood is crapping these days.

Aided by friendly Yokai (spirits), a cowardly boy must overcome his fears to avert the destruction of Tokyo. Fun and visually impressive family fantasy from "extreme" Japanese director Takashi Miike; the best part are the dozens upon dozens of Yokai, each unique, from a turtle man to a woman with an infinitely extensible neck to a living umbrella. Amereican kids would love it, except for the subtitles.