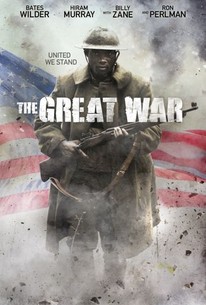 During the final days of World War I, a regiment of daring African-American "Buffalo Soldiers" is trapped deep behind enemy lines. After one of these soldiers manages to escape, he's ordered to join a select team of white troops, led by a battle-scarred officer, to find and rescue the survivors. Casting aside their racial differences, the determined men join forces to find their lost comrades in this gripping, action-filled tale of bravery and unity.

Critic Reviews for The Great War

Unfortunately, despite his obvious passion for the genre, Luke doesn't yet have the cinematic chops (or clearly, the budget) to effectively put his vision onscreen.

It simply does not have the budget or craft for the scale it requires.

So clumsy in its handling of racism within the American Expeditionary Forces that it makes some of the racial mishaps of "Green Book" seem subtle in comparison.

There are no featured reviews for The Great War at this time.