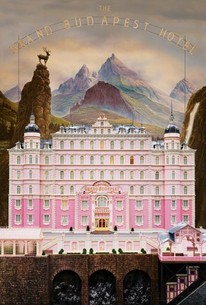 THE GRAND BUDAPEST HOTEL recounts the adventures of Gustave H, a legendary concierge at a famous European hotel between the wars, and Zero Moustafa, the lobby boy who becomes his most trusted friend. The story involves the theft and recovery of a priceless Renaissance painting and the battle for an enormous family fortune -- all against the back-drop ofa suddenly and dramatically changing Continent. (c) Fox Searchlight

Bob Balaban
as M. Martin "The Society of the Crossed Keys"

Fisher Stevens
as M. Robin "The Society of the Crossed Keys"

Wallace Wolodarsky
as M. Georges "The Society of the Crossed Keys"

Waris Ahluwalia
as M. Dino "The Society of the Crossed Keys"

Discerning travellers and Wes Anderson fans will luxuriate in the glorious Mittel-European kitsch of one of the director's funniest and most exquisitely designed movies in years.

"The Grand Budapest Hotel" is not his grandest work yet, but it is one worth an extended stay.

The mannered, madcap proceedings are often delightful, occasionally silly, and here and there, gruesome and/or heartbreaking.

Grand isn't good enough a word for this Budapest Hotel. Great is more like it.

Anderson's films are too precious for some, but for those of us willing to lose ourselves in them, they're a delight. "The Grand Budapest Hotel" is no different, except that he has added a hint of gravitas to the mix, improving the recipe.

It is beautifully designed, visually ravishing and symmetrical to the nth degree. And it is full of frantic chaos, with a Lord of Misrule at its centre played with effortless comic brilliance by Ralph Fiennes.

At 45 the Wes Anderson metaphor reaches its peak and is still more polymorphic than ever. The Grand Budapest Hotel is another eccentricity of its world, where tragicomedy wraps itself of dreams without the need to wake up. [Full review in Spanish]

"Times have changed." It's an elemental Wes Anderson lament...

The desire to show fantastic worlds and tell stories in the face of the inevitable march of time and destructive forces is at the core of the film. Anderson's films are beginning to show the soul beneath the exactitude.

The Grand Budapest Hotel is a fast-paced beautiful spectacle that never ceases to amuse you.

Magnificent and magical, once you check-in, you'll never want to check-out.

Debbie Lynn Elias
Behind The Lens
View All Critic Reviews (302)

Anderson's grandest film to date is a thrilling ride and a visually dazzling pastiche that is deliciously preposterous, entertaining and hilarious in the same measure, with a fantastic soundtrack and a phenomenal production design like nothing he has ever made before.

A host of comic book characters in typical Wes Anderson style set in a fantasy country not unlike Eastern Europe in a fantasy time not unlike the 1930s with pretty and playful cinematography not unlike a Jeunet movie. Another tour de force by Ralph Fiennes, the sophisticated hotel proprietor dedicated to bringing civilisation to the uncouth "modern" age.

Anderson explores the strange double identity of nostalgia in 'The Grand Budapest Hotel', in which characters relive both the glory and the tragedy of the past. The performances (especially a standout Ralph Fiennes) are all spectacular, the score and production design are perfection as well. Oh, and it's hilarious. Just may be Anderson's best film yet.