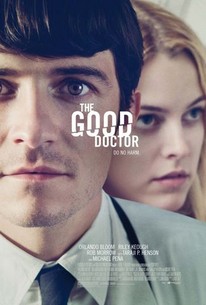 Martin Blake (Orlando Bloom) is an ambitious but anxious young doctor, eager to impress his superiors and colleagues: Chief Resident Waylans (Rob Morrow), self-assured fellow intern Dan (Troy Garity) and no-nonsense nurse Theresa (Taraji P. Henson). But things are not going Martin's way and he can't seem to shake off his insecurities. When 18-year-old patient Diane (Riley Keough) is admitted for a kidney infection, Martin steps in, getting the much-needed boost of self-esteem he craves. But things take a dark turn as his enthusiasm begins to become an obsession. -- (C) Magnolia

News & Interviews for The Good Doctor

View All The Good Doctor News

Critic Reviews for The Good Doctor

Wants to be a twisty nail-biter, but never creates much suspense or surprise.

Orlando Bloom gives one of his most interesting performances; It's a creepy, effectively chilling piece of work.

Its meaning is unclear. Its vital signs are shaky. And before long, the whole frail thing's on life support, just begging for somebody to pull the plug.

Targeting age-old English class consciousness, not contemporary American healthcare woes, the movie is a shrewd commentary on careerism and status.

Whether you take it as a comment on our rote acceptance of authority figures or just a deliciously creepy character study, you'll come away from "The Good Doctor" wanting to keep religiously eating that apple a day.

If "The Good Doctor" isn't a bad movie, it tells only half the story.

An intermittently fascinating character study about a plain man who does evil things for selfish reasons.

...the picture never pushes the creepiness of Bloom's doctor far enough to make the experience wholly effective but it's fun to watch Bloom stretch his legs in a sinister role.

Visually capturing that chemistry between god-in-training and his just rewards silently sums up the film long before the kindest cut of all.

After watching this film you should be doubly determined to stay away from hospitals.

Audience Reviews for The Good Doctor

The film was ok, but could have been so much better. They had a good idea for a film, but didn't execute it correctly. They needed a rewrite. The first 2/3rds of the film was good. I had a problem with the last 1/3rd of the film. I didn't like the Michael Pena storyline. I was disappointed by the ending. The film kind of reminded me of the movie Malice. Performance wise Orlando Bloom does a really good job. Also some good supporting performances from Taraji P. Henson, Riley Keough, Rob Morrow, and J.K. Simmons.

This was a thrilling and disturbing film. Orlando Bloom's portrayal of the good doctor was haunting and intriguing. Michael Pena's approach was interesting as well. Highly recommended.

If Orlando Bloom were an unknown actor making his movie debut here, I would TOTALLY tell him, "Dude, you gotta use this for your reel!" He comes across here as really interesting, one to watch. This is a quietly riveting film, but one that ultimately feels half-baked and often preposterous. As we follow a young medical resident through his first days at a hospital, his attraction to a female patient begins to reveal an obsessive, psychotic personality. I was reminded of Robin Williams in ONE HOUR PHOTO, although THE GOOD DOCTOR has a muted, hushed tone throughout. Bloom's character lacks that one showy scene that could have sent this story over-the-top into FATAL ATTRACTION territory, and it's all the better for it. A calm, cool and collected main character is far more interesting to watch than one who bellows and bleats all the time like some sort of mutant Al Pacino/Jack NIcholson villainous hybrid. Bloom and co-star Riley Keough set the tone here with their very hushed doctor/patient interactions. It's all quiet, understated subtext that rules the day here. Unfortunately, as things progress, even though the filmmakers have taken great pains to ensure an internal logic, it's almost impossible not to throw up your hands at some point and say, "Really? REALLY?" Taraji P. Henson and Michael Peña get the best moments here as tow co-workers who seem to see right through Bloom's character. Molly Price and Troy Garity, however, appear to be victims of editing, as I don't understand at all the appeal here for the pair. Price is usually so witheringly good, and there definitely was room for a big showdown of a scene involving her and Bloom, but it never comes to pass. Garity just kind of traverses the sidelines of the story and never comes into focus. BEE-ZARRE! What we're left with here is a carefully modulated cautionary tale about the dangers of hospitals. Without spoiling anything, the ending is intentionally abrupt, and feels deeply unsatisfying at first glance. After shaking my head and flapping my hands as I headed to the lobby, I thought about it some more and thought, hmmm, at least it's going for something interesting. Nobody gets shot in a bathroom as they charge at someone with a knife. Nobody boils any bunnies. The photography is rich and textured for something so obviously low-budget. It's also as serene and blank as it's main character, and I suppose, in a sense, that is accomplishment enough.

Orlando Bloom is an interesting case. He has always come off as a prestigious type of actor who peaked early and has since been unable to deliver a successful film that wasn't a part of The Lord of the Rings or Pirates of the Caribbean franchises. He'll get a bit more exposure of course this winter as he reprises the role of Legolas, but in the mean time he has starred in and produced this small indie film that premiered at the Tribeca Film Festival. The Good Doctor is a simple little psychological drama that is straightforward in the way it approaches its story allowing the real focus of the film to be on the odd principle character. The way in which I interpreted the film was more in the vein of a character study rather than any kind of commentary on the healthcare system or any allusions to what is wrong with that system. The film actually cares very little about commenting on those types of issues, if at all, but is instead more invested in the idea that someone with such knowledge and power will abuse it for personal gain. That is of course nothing new, people do it all the time, yet the angle the film takes on the idea the person with that power might not be of the right mind; that they would abuse that authority to the point it affects the entire life course of those who willingly submit themselves and their welfare to that person is what's instilled in the audience. It is enhanced by the films creepy tone and a rather impressive performance from Bloom who becomes increasingly dependent on this need for praise and respect he feels he rightly deserves. He believes it so much we can only hope he lives up to the reputation he's given himself and will be able to cure his own serious condition. read the whole review at www.reviewsfromabed.blogspot.com