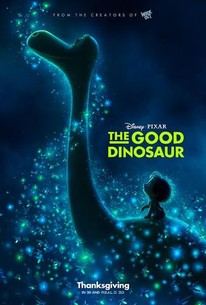 Critics Consensus: The Good Dinosaur delivers thrillingly beautiful animation in service of a worthy story that, even if it doesn't quite live up to the lofty standards set by Pixar, still adds up to charming, family-friendly entertainment.

Critics Consensus: The Good Dinosaur delivers thrillingly beautiful animation in service of a worthy story that, even if it doesn't quite live up to the lofty standards set by Pixar, still adds up to charming, family-friendly entertainment.

Critic Consensus: The Good Dinosaur delivers thrillingly beautiful animation in service of a worthy story that, even if it doesn't quite live up to the lofty standards set by Pixar, still adds up to charming, family-friendly entertainment.

"The Good Dinosaur" asks the question: What if the asteroid that forever changed life on Earth missed the planet completely and giant dinosaurs never became extinct? Pixar Animation Studios takes you on an epic journey into the world of dinosaurs where an Apatosaurus named Arlo makes an unlikely human friend. While traveling through a harsh and mysterious landscape, Arlo learns the power of confronting his fears and discovers what he is truly capable of. (C) Disney

Steve Zahn
as Thunderclap
View All

News & Interviews for The Good Dinosaur

3 Dinosaur Movie Alternatives to Jurassic World: Fallen Kingdom
All Pixar Movies Ranked From Best to Worst
Poll: Which Pixar Sequel Would You Like to See Next?

View All The Good Dinosaur News

Critic Reviews for The Good Dinosaur

If The Good Dinosaur falls low in the rankings of the company's now 16 titles, it is still leagues finer than the flurry of frenetic colors and screwball pacing of the standard children's animated movie.

The Good Dinosaur is the animation behemoth Pixar at its most formulaic and uninspired.

The Good Dinosaur is by no means a bad movie. But it breaks new ground for Pixar in that it's the studio's first feature that is explicitly-and pretty much exclusively-a kid's movie.

The digital landscapes are meant to be breathtakingly beautiful, but they tend to come across more like very expensive screensavers or immersive desktop wallpapers.

I found it desperately disappointing, unoriginal and twee ...

If The Good Dinosaur falls short in the narrative department, it represents a step forward for Pixar's artists.

Filled with a visual and emotional magic and majesty that touches the senses and the heart, The Good Dinosaur is 'Dino-Rrific'!!

What rises the entertainment quality of The Good Dinosaur above what is unquestionably derivative are those encounters, and the environments in which they experience them.

For me, The Good Dinosaur will be a pleasant, forgettable experience. But for some kid out there, it's going to be the first time they grappled with the concept of mortality. In that sense, the movie may not be that good, but at least it's doing good.

It works fine on its own and is an entertaining and occasionally moving children's film, it just feels a bit more anonymous than the high quality we've come to expect from Pixar.

Innovation and imagination prove to be as extinct as pterodactyls in the modern world.

Audience Reviews for The Good Dinosaur

Somewhat cartoonishly simplified animal and dinosaur characters and a plot we've seen many times before made for Pixar's least successful film of recent years. That doesn't mean this is a failure, there are moments of excitement, a very sweet and touching ending and beautifully animated landscapes. Especially children can experience a thrilling adventure here, only adults may have a harder time relating to the film than many former Pixar hits.

A family fun movie which entertains to the very end.

It is dazzling to look at (if you don't mind about all those rubber-looking characters), but Pixar aims too low with this derivative animation made for very small children - a silly, predictable and forgettable movie about facing your fears, the importance of family and whatever, who cares.