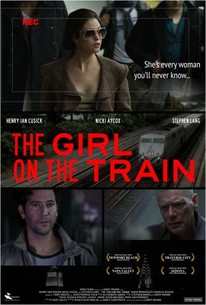 The Girl on The Train Photos

A documentary filmmaker boards a train at Grand Central Terminal, heading to upstate New York to interview the subjects of his latest project. A chance encounter with a mysterious young woman leads him on a journey of a very different sort, and within the blink of an eye, Hart is forced to leave his complacent life behind for a world in which the line between fantasy and reality is blurred. As Hart tells his strange story to a police detective he finds himself being questioned as Martin tries to discover whether Hart is the victim or the suspect in the strange affair. (c) Monterey Media

Critic Reviews for The Girl on The Train

Blends the self-important inner monologue of a documentary filmmaker (interviewing a Holocaust survivor, no less) with a maudlin romantic mystery.

The Girl on the Train believes it's far more intelligent than it actually is, both in structure and in storytelling.

Audience Reviews for The Girl on The Train

There are no featured audience reviews yet. Click the link below to see what others say about The Girl on The Train!

The Girl on The Train Quotes