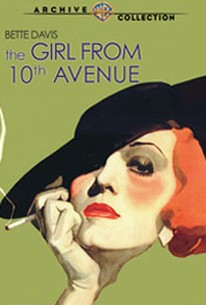 The Girl from 10th Avenue Photos

Despite its hard-line title, Girl from Tenth Avenue is a lightheaded--er, lighthearted--Cinderella story. Bette Davis plays a girl of the tenements who makes the chance acquaintance of playboy Ian Hunter. To get even with his fickle fiancee (Katherine Alexander), Hunter marries Davis, whom he doesn't even know. The situation is of course "quite impossible" to Hunter's snooty friends and relations, but true-blue Davis turns out to have more character and intestinal fortitude than the whole filthy-rich bunch of 'em. She gets Hunter to stop drinking and to assume some responsibility over his life, thus winning out over his bitchy ex-fiancee. Based on a play by Hubert Henry Davies, Girl From Tenth Avenue is totally reliant upon the dynamic Bette Davis for its success.

Bette Davis
as Miriam A. Brady

Bill Elliott
as Clerk at Club

Heinie Conklin
as Waiter at Marchand's
View All

Critic Reviews for The Girl from 10th Avenue

It's the usual sort of summer movie, and you don't have to go all the way downtown in the heat to know what happens to everybody in the end.

Audience Reviews for The Girl from 10th Avenue

There are no featured audience reviews yet. Click the link below to see what others say about The Girl from 10th Avenue!

The Girl from 10th Avenue Quotes