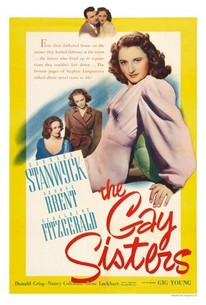 In this grim melodrama, Barbara Stanwyck plays the eldest of three wealthy sisters who become orphans when their father dies in France. Threatened with the danger of losing the opulent family home, Big Sister makes a grand sacrifice and secretly marries a real estate developer so she can inherit her aunt's fortune. A few years later, she learns that he is after the family estate and wants to tear it down so she leaves him and tries to stop him. More time passes and the husband ends up taking her to court when he learns that she has borne him a son without telling him. The part of "Gig Young" was played by actor Byron Barr who later assumed the name before he became famous. ~ Sandra Brennan, Rovi

Carol Joyce Combes
as Evelyn as a Child

Charlene Salerno
as Susanna as a Child

Sarah Edwards
as Lady in Elevator

Critic Reviews for The Gay Sisters

The Gay Sisters is a great and interesting movie that gets its mise-en-scène right. [Full Review in Spanish]

There are no featured reviews for The Gay Sisters at this time.