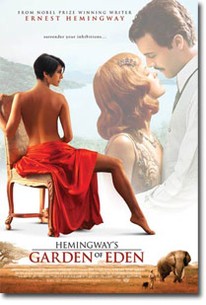 Critics Consensus: Garden of Eden dramatizes Ernest Hemingway's clipped storytelling without carrying over the intelligence that undergirded the author's writing, yielding a thin drama full of artifice and no feeling.

Critics Consensus: Garden of Eden dramatizes Ernest Hemingway's clipped storytelling without carrying over the intelligence that undergirded the author's writing, yielding a thin drama full of artifice and no feeling.

Critic Consensus: Garden of Eden dramatizes Ernest Hemingway's clipped storytelling without carrying over the intelligence that undergirded the author's writing, yielding a thin drama full of artifice and no feeling.

Produced for Tranquil Seas by Lorne Thyssen and Timothy J. Lewiston, directed by John Irvin and starring Mena Suvari, Jack Huston, Caterina Murino, Carmen Maura, Richard E. Grant and Matthew Modine, "Hemingway's Garden Of Eden" was adapted from the Ernest Hemingway book by former Paris Review editor James Scott Linville. The book was published posthumously and, when it finally hit the bookstores in 1986, it was an immediate success. It remains one of Hemingway's most debated novels. Set in the jazz age years, prior to the depression, the story follows a successful young American writer, David Bourne (JACK HUSTON), and his beautiful wife, Catherine (MENA SUVARI), on their extended honeymoon in Europe. Catherine soon becomes restless and starts to test her husband's devotion, pushing him to the limits of her imagination. Already unsure of the games his wife is playing, David is both uncomfortable and curious when she brings a sultry Italian girl, Marita (CATERINA MURINO), to spice things up. As the erotic game reaches new levels, the events that follow will change their lives forever. --© Roadside Attractions

Alejandro Arroyo
as Man in Crowd
View All

It just seems like a bunch of actors playing dress-up.

Everybody flirts with everyone else as director John Irvin pours on a level of shopping-mall-gift-shop-kitsch that would shame Wayne Newton.

Better than it might have been yet still a definite letdown, a literary B-side turned into something not awful, just forgettable.

Ms. Suvari's Catherine is so extravagantly monstrous that Mr. Huston's David, who provides a desultory narration, comes across as an inert nonentity.

The dialogue and plot in Garden Of Eden are rendered clearly and precisely, without a lot of fine shading. The result is a movie that's all surface... all silly, silly surface.

Vet British helmer John Irvin's mannered, bloodless and appallingly thesped filmization of Hemingway's posthumous novel, though unlikely to set the author rolling in his grave, may still have viewers rolling in the aisles.

Sex has never felt more repellent after watching Eden, a clumsy effort of eroticism and psychological gamesmanship that's utterly devoid of structure and feeling. It's an awful picture.

The question that occurs is not whether director Irvin hates actors but rather, how much. We can imagine him shouting to the cast: 'Once more, with less feeling. Get shallow! Can't you do worse than that?'

In this Riviera vacation atmosphere, all sun, sand, and skin, the dialectic of opposites the film attempts to enforce instead melts down to little more than kinky foreplay.

A veteran director, the attractive lead performers and some stunning settings cannot bring credibility to this inherently stilted story.

With Hemingway pictured as a wuss and laughable acting, could this be intended as camp?

A writer and his wife take up with an Italian woman, and the three form an odd love triangle filled with lust and temptation. Garden of Eden confuses me. I haven't read the novel, but after the film, I want to. From what I can tell from the film, it seems like a first draft -- ideas that Papa plays with but hasn't developed into real characters yet. As Catherine transforms herself and her husband into carbon copies and as Catherine expresses her sexual obsession with Marita, it seems like Hemingway is exploring the slippery nature of sexuality -- how one can experiment with one's sexual identity. But what Hemingway specifically says about this concept remains unclear. It's doubtless that the story David writes -- told in flashbacks starring Matthew Modine -- is a mess. It's Hemingway's fantasies about manhood expressed through hunting and domination over nature. But this story has little to do with the frame story and doesn't give us any significant insight into David's character. Overall, I wonder if the novel is this incomplete because although the film has the beginnings of some interesting additions to Hem's oeuvre, it ultimately doesn't amount to much.

Consider me in the minority, but I actually really enjoyed this film. The acting fits better than I had originally thought and it works on the perfect period piece level of looking and feeling out of this century.