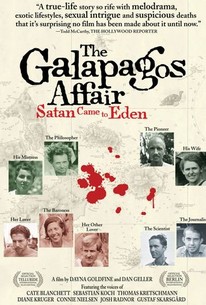 Critics Consensus: It doesn't quite live up to its marvelously lurid premise, but The Galapagos Affair is still stranger than fiction in a very entertaining way.

Critics Consensus: It doesn't quite live up to its marvelously lurid premise, but The Galapagos Affair is still stranger than fiction in a very entertaining way.

Critic Consensus: It doesn't quite live up to its marvelously lurid premise, but The Galapagos Affair is still stranger than fiction in a very entertaining way.

Darwin meets Hitchcock in this true-crime tale of paradise found and lost. The Galapagos Affair is a fascinating documentary portrait of a 1930s murder mystery as strange and alluring as the famous archipelago itself. Fleeing conventional society, a Berlin doctor and his mistress start a new life on uninhabited Floreana Island. But after the international press sensationalizes the exploits of the Galapagos' "Adam and Eve," others flock there - including a self-styled Swiss Family Robinson and a gun-toting Viennese Baroness and her two lovers. Clashing personalities are aggravated by the island community's lusty free-love ethos, and when some of the islanders disappear, suspicions of murder hang in the air leaving an unsolved mystery which remains the subject of local lore today. (c) Zeitgeist

News & Interviews for The Galapagos Affair: Satan Came To Eden

View All The Galapagos Affair: Satan Came To Eden News

Critic Reviews for The Galapagos Affair: Satan Came To Eden

The film builds tension slowly and steadily and shows the stuff of true crime in an exotic land. The directors resist sensationalizing, and instead mete out the story in thorough--perhaps too thorough-- details.

To make a thrilling documentary about the past, you need dead people who were honest or creative in ways you can exploit. This extraordinary film, which deconstructs a murder mystery from the Thirties, has such people in spades.

Quite a few pounds of fat could have been cut from this film, but it's a remarkable tale.

Could do with a brisker edit, but the bizarre, exotic nature of the subject matter is wholly riveting and confidently staged.

The mysteries are fascinating, all the more so because they are still unsolved.

A dazzling documentary about an unsolved murder in an ad hoc community in the Galapagos islands in 1934.

A real-life whodunnit provides a riveting narrative backbone, but despite some juicy melodrama, this languid doc never quite lives up the intrigue of its central conundrum.

One typically feels a certain disconnect when looking at old black and white photos like these, but the readings bridge that gap and give the photos an eerie immediacy.

Fascinating but labored attempt to solve an 80 year old "murder in paradise" mystery.

[An] exotic thriller of a doc.

In this gripping true-crime story, an absurdist stew of petty tensions and quasi-Nietzschean dynamics rip apart the tiny colony of Europeans who settled one of the Galapagos islands in the '30s.

holds the viewer and compels him

Audience Reviews for The Galapagos Affair: Satan Came To Eden

There are no featured audience reviews yet. Click the link below to see what others say about The Galapagos Affair: Satan Came To Eden!