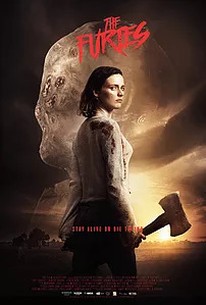 Rebellious high school students Kayla and her best friends Maddie are stalked and abducted by a sinister presence while out bombing their neighbourhood with graffiti. Waking up, in the woods, bound and disoriented in a claustrophobic coffin-like apparatus, Kayla's first thought is of Maddie. Before she has a chance to ruminate on the dreadful fate that may have befallen her friend, Kayla notices a terrifying masked man fast approaching, armed with a razor-sharp axe. As a chase ensues, it soon becomes clear that Kayla and her pursuer are not alone. There are six more young women, each with a masked stalker assigned to them, hell-bent on murder. If that girl dies, so does the stalker - retinal cameras implanted in their eyes are unwilling players in a deadly game. As the threat of more killer closes in, she races to save as many girls as she can. But when the girls turn on each other, Kayla's killer instinct in unleashed and she does whatever it takes to survive and seek revenge on her abductors.

Critic Reviews for The Furies

The effort to combine sermonising and sadism at worst feels hypocritical, and even at best has a vaguely self-congratulatory air. After all, many earlier horror films have addressed similar themes without being so heavy-handed about it.

While the lack of backstory or killer character building may turn some off, 'The Furies' has plenty to offer fans of the slasher sub-genre.

Creative but dull. Maybe it breaks a few rules but The Furies is downright boring and repetitive. [Full review in Spanish].

D'Aquino's film possesses far more ambition than sense, but it also has a few things going for it: style, gore, and a credible and unconventional Final Girl.

Delivers with a gory glee

Peter Gray
This is Film

I was pleasantly welcomed by this unique display of horror and it even taunted the idea of the killer within, finding the true malice in people.

The Furies game of cat and mouse is hardly a wildly original tale, but the sheer volume of its participants makes for some seriously entertaining horror.

The Furies is the perfect way to start off the spookiest of months on Shudder. It's a fun watch that also offers up a twisty story that expands on the typical tropes of the genre while also subverting them.

Kate Sánchez
But Why Tho? A Geek Community

Due to the strong performances by Dodds and Ngo, The Furies is an entertainingly blood-soaked calling card for director D'Aquino, and will satisfy gore-hounds.

A tapestry of patriarchal images from classic sources made into a contemporary vision of the gendered extremes in our culture, wrapped up in a weird slasher premise.

There are no featured reviews for The Furies at this time.