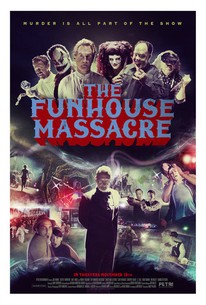 On Halloween night a gruesome group of the United States most notorious and colorful serial killers escape from Statesville Asylum and descend on a giant funhouse whose theme is based on their different reigns of terror. The unsuspected carnival goers think that the carnage created is just part of the show, that is until they become part of the main attraction. The only people left to stop them, a rag tag group of college kids, a clueless Deputy and the local Sheriff, who seems to have a strange attachment to the leader of this gaggle of maniacs, the silver tongued devil, "Manny the Prophet."

E.E. Bell
as Animal
View All

News & Interviews for The Funhouse Massacre

View All The Funhouse Massacre News

Critic Reviews for The Funhouse Massacre

Not the cleverest or most original horror comedy, Andy Palmer's indie feature is nonetheless above average within that subgenre, offering fast-paced fun for fans.

The minimal story quickly devolves into one methodical murder after another - their effect blunted by the jokey tone.

The problem is that "The Funhouse Massacre" isn't particularly funny or scary, and if there is supposed to be an element of satire about our contemporary inability to sort out what's real from what's not, well, that falls flat, too.

Amateurish direction and generic characterization make a light premise - serial killers slaughter a rural carnival's haunted-house patrons while pretending to be carnies - feel like a slog.

If you can forgive the minor issues, The Funhouse Massacre is with your time.

With a range of maniacs that hit almost every serial killer trope and expert special F/X by Robert Kurtzman, it definitely feels like a throwback film.

If you're looking for a needle of bliss buried in that haystack of horror-hell, this one more than lives up to the 'fun' promised in the title.

A grab bag of laughs, gore, and creeps, and it's definitely a horror comedy you should look in to come October.

It deftly handles all the horror pic clichés and the performers are a trip to watch.

Holds a low-budget charm, but there is a better film-one that's cleverer, creepier, and more imaginatively utilizes its setting-just out of reach.

The Funhouse Massacre isn't the kind of unexpected eye-opener that keeps genre fans panning through the silt, but it has moments.

Audience Reviews for The Funhouse Massacre

I don't know, sometimes I read reviews of horror films and it's obvious that the reviewer in question has a distaste for the genre, which makes it strange why they'd review those types of films in the first place. The job of a film critic, to me, should be to be as objective as humanly possible, regardless of the particular genre the film might be. I'm not one of those people that distrusts or finds film critics irrelevant because they hate a film that I like or they love a film I hate. And I don't even know why I say this in reference to this film, which actually had a fairly positive reception among critics. I just felt that it was something worth pointing out. If you're a film critic and you hate horror movies, then don't review them, it's gonna be hard to take you or your review seriously. That's really a pointless tangent I went on, since it really has nothing to do with this movie. Maybe it does, since I Googled this movie and a negative review came up. And this isn't even in reference to that review, since I'm sure it's a well-written and well-reasoned review. Anyway, the point is, finally getting back to this flick, that I thought this was a really damn fun film. The only reason I didn't give it 3.5 stars is that I didn't feel that it was a really good movie. I'm sure I've sometimes made the exception, but I won't in this case. I just don't fee l comfortable doing it. This is a pretty shameless and unpretentious films. It has no delusions of grandeur, it's just content to be a silly and goofy little movie that you can watch with a group of friends and you can all have a good together watching it. Don't get me wrong, I love indie horror films like It Follows, Starry Eyes and even They Look Like People, which I really wouldn't classify as straight up horror, but you need films like The Funhouse Massacre. Films that you can watch without really having to think too much. There's a place for both the smarter and thought-provoking horror films and there's room for the ones like this. I don't know why, but I get the feeling that there's two groups of people and both of them feel like horror should be what they prefer. And that's just not the way it is, there's room for every type of horror film is existence. But yea, the film doesn't take itself too seriously and it's definitely a funny movie. It's obviously not Shaun of the Dead funny, or even Dead Snow 2 funny, but there's a lot of clever lines in the film along with a cast that clearly seemed to be having a great time making this. And, really, overall, I just like the concept of psychopathic serial killers taking over a funhouse whose several mazes were inspired by their crimes. The film doesn't really do as much with this as they could, but I still think that it leads to an entertainingly novel approach. I'm not saying that there aren't other films like this in existence, but in the current horror climate, I do think that this still manages to stand out. Like I said, or maybe I didn't, but I thought this was a well-written movie. I do think it loses some steam near the end, but it's not really that much. And the way this ends does leave room for a sequel but I don't really know how you do a sequel. Part of the fun of the flick is the actual setting itself and the relative ease with which these villains find people to kill on Halloween night. If there is a sequel, you'd have to take it out of the funhouse and I don't know how much fun that movie would be. And, out of the six serial killers, only two of them make it out alive, so I don't know how you play with that. I wouldn't mind seeing a sequel, but it's not like I'm eagerly anticipating it as I'm hesitant if they can capture this film's tone in the sequel. But that's just me, maybe the writers have a great idea for the sequel. With that said, I really did have a blast watching this movie and it's an easy recommendation, only as a rental though. Obviously not everyone is gonna like it, but I feel that this would appeal to a more casual crowd, just wanting something silly to watch with their friends. This would work great for that. Good stuff right here.