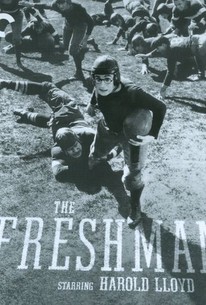 One of Harold Lloyd's best feature-length comedies, The Freshman, features the bespectacled regular guy as Harold Lamb, a naïve young man who heads off to college believing campus life will be just as it is in the movies; he even learns a little dance he saw one of his favorite actors do in a film. However, Harold soon discovers that real life isn't all that much like the pictures, and he quickly becomes the laughing stock of the university. Determined to prove himself, Harold tries out for the football team, but he serves as water boy and rides the pine until he finally gets a chance to redeem himself at the big game. Along the way, Harold also tries to woo a lovely co-ed, Peggy (Jobyna Ralston). 22 years later, writer/director Preston Sturges used the climactic football game as the opening for his collaboration with Harold Lloyd, The Sin of Harold Diddlebock.

James Anderson
as Chester A. Trask

Charles Farrell
as Student
View All

Lloyd has never been a very good actor; he has been a dummy for comic devices. And we are not much moved by the scene in The Freshman in which he learns at last that he has been the butt of his fellow students, instead of, as he has believed, their hero.

Mr. Lloyd could be funny playing an undisturbed mummy. Simply this: The Freshman is not so funny as earlier of the comedian's adventures.

Lloyd can't compete with Chaplin and Keaton, but he perfectly embodied the can-do energy of the 1920s, and few things are quite as funny as his bespectacled, apple-pie face twisted by a panic that was always justified.

This is a regular Harold Lloyd strip of fun, which is made all the more hilarious by introducing something like suspense in the sequences on the football field.

Lloyd's films are prose where Keaton's were poems, but gag for gag, Lloyd was the funniest screen comic of his time.

The Freshman (1925) is actor/director Harold Lloyd's silent film satire of college life (aka College Days), one of his best-remembered and well-crafted films and also his most successful effort. It was one of the top-grossing films of the year...

The plot is a cliche now, but at the time must have felt fresh. And even though modern viewers have seen its like perhaps dozens of times, it somehow does little to diminish The Freshman's charm.

...another solid comedy film, featuring Lloyd as a naïve character who just wants to be popular at "Tate University," described in a title card as "a large football stadium with a college attached."

In a comedy of emulation, idolizing and popularity, the flimsy mannequins of maleness stand out as Lloyd gives the old college try to becoming a fresh man by being a stale model.

A treasure that still stands as one of the greatest comedies ever made.

Flawlessly executed and edited for maximum impact, the gags have timepiece precision, but Lloyd always sells his mishaps as things that just kind of happen to his character [The Freshman] works because it keeps viewers rooting for its hero.

Great fun in this silent college comedy. I have yet to see Buster Keaton's entry in this subgenre, College. I have seen Clara Bow's 1920's college set The Wild Party. Harold Lloyd is at his peak in this type of nerdy role. It is quite enjoyable to time travel to American college life in the Jazz age. Lloyd is nearly as great as Keaton and Chaplin with the physicality of slapstick. The football practice and big game are the central showcases of slapstick here of course. Right up to the 90's with Adam Sandler's The Waterboy many of the same character types have been repeated over and over again in Hollywood college set comedies.

Harold Lloyd is his awkward, lovable self in â~The Freshmanâ(TM), where he goes off to college seeking popularity. Heâ(TM)s mostly mocked without realizing it, and after trying out for the football team, is used as a tackling dummy in practice and then as a water boy during the game, though of course thinks he may go in at any time. He hosts a big dance, the â~Fall Frolicâ(TM), but has his ill-tailored suit falls apart as he tries to move around. There are few laugh out loud moments, even if the filmâ(TM)s heart is in the right place, and some of the scenes go on for just a little too long. Seeing football played so long ago, even comically, with those thin leather helmets and that puffier ball, and finding out the crowd scenes were shot at halftime during the 1924 â~Big Gameâ(TM) between Cal and Stanford, was also personally interesting. That move where he unlaces the ball is pretty cool too. Lastly, and this is kind of a quirky thing of mine, but I like how Lloyd gives us shots of objects or things in print in his films, in this case various books from the period, newspaper articles, and a crossword puzzle he notices Jobyna Ralston doing on a train and tries to help her with. Even her final message to him is a handwritten note, and very sweet. Not quite as good as â~Safety Lastâ(TM) or â~Girl Shyâ(TM) from the previous two years, but solid entertainment.

A typical college comedy for the 20s, and the plot is predictable, but Lloyd makes this movie enjoyable and entertaining. He really is hilarious in all his mishaps in this movie. I really enjoyed it, and I recommend it.

Chaplin may be filled with warmth and pathos, Keaton may be a great athlete, but Harold Lloyd is just plain funny, and thus my favorite silent comedian. And The Freshman is one of his best. A nerdy young man attends a university to play football in order to impress a girl -- why else, right? He is obviously not up to the task and pays for it dearly. Lots of slapstick silliness, sight gags, and lots of heart to boot. Got to see it on the big screen at a repertory screening. The 21st century audience I saw it with laughed hysterically, as if this 80 year old film (at the time I saw it) was a new release. How many of today's Hollywood comedies will still be funny 80 years from now?