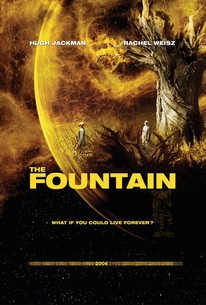 Critics Consensus: The Fountain -- a movie about metaphysics, universal patterns, Biblical symbolism, and boundless love spread across one thousand years -- is visually rich but suffers from its own unfocused ambitions.

Critics Consensus: The Fountain -- a movie about metaphysics, universal patterns, Biblical symbolism, and boundless love spread across one thousand years -- is visually rich but suffers from its own unfocused ambitions.

Critic Consensus: The Fountain -- a movie about metaphysics, universal patterns, Biblical symbolism, and boundless love spread across one thousand years -- is visually rich but suffers from its own unfocused ambitions.

Requiem for a Dream director Darren Aronofsky switches gears from drug-induced urban malaise to abstract science fiction with this time-tripping symbolic tale of a man's thousand-year quest to save the woman he loves. Moving between representational stories and images, this meditation on life and death focuses on the concept of the mythical Tree of Life that is said to bestow immortality to all who drink of its sap. In one of the film's allegorical timelines, a 16th century Spanish conquistador played by Hugh Jackman sets out to find the tree in order to save his queen (Rachel Weisz) from the Inquisition. Another conceptual story finds Jackman centuries later, struggling with mortality as a modern-day scientist desperately searching for the medical breakthrough that will save the life of his cancer-stricken wife, Izzi. The third and most abstract concept finds Jackman as a different incarnation of the same character-idea, this time questing for eternal life within the confines of a floating sphere transporting the aged Tree of Life through the depths of space. Even more avant-garde than his breakthrough film Pi, The Fountain finds Aronofsky almost completely abandoning conventional story structure in favor of something more cinematically abstract. Though the film was originally slapped with an R by the MPAA, Aronofsky and co. re-edited it to conform to a PG-13 rating. ~ Jason Buchanan, Rovi

Fernando Hernandez
as Lord of Xibalba

News & Interviews for The Fountain

View All The Fountain News

Critic Reviews for The Fountain

I will concede the film is not a great success. Too many screens of blinding lights. Too many transitions for their own sake. Abrupt changes of tone.

Ambitious? You bet, but also a towering, tumultuous folly. It's the movie equivalent of a prog-rock double album, short on humour, long on pomposity, and as for what it all means - you might well ask.

If only all reputed turkeys gave us such a trip.

How can so much style, talent and money be squandered in the service of such blatant airheadedness?

There is a strange deadness in the film, together with a callow self-importance and self-pity which become more stultifying with every minute that passes.

First, the good news: The Fountain is only 97 minutes long. Now the bad: that's 97 minutes of rampant metaphysical codswallop.

Although some may find the ping-pong time travels as distracting or even annoying, this is definitely my pick as the most beauteous and emotionally exquisite films of the decade. The Fountain speaks volumes.

As with his other films, The Fountain is a labor of love for Aronofsky, and it shows. If you prefer intellectual and challenging fare, by all means, go and see this one.

Wolverine Man Jackman works nobly in the three parts of his trinity.

For all its missteps into mythological navel-gazing, The Fountain manages to stand apart as Aronofsky's personal exploration into the nature of love and the willingness to pursue an object of obsessive desire.

Told in nonlinear fashion, the story keeps us waiting for revelations about what's really going on -- but these are few and far between. This problem is exacerbated by the artificiality of just about everything that we see.

The film comes in at 95 minutes, yet it makes scant use of even that time, filling scene after scene with confusing (though often beautiful) kaleidoscopic visuals and not nearly enough plot.

Audience Reviews for The Fountain

A surgeon desperately searches for a cure for his wife's cancer while absorbing himself into the world represented by her final novel. Darren Aronofsky is nothing if not brave and once again willingly sacrifices mainstream acceptibility to realise his vision. Similar in format to 2046 in that fantasy and reality are happening in parallel on screen, The Fountain is a representation of his musings on mortality, love and loss and coming to terms with personal grief. It is a truly stunning film to look at with an appropriately beautiful score, complimented nicely by a surprisingly sensitive performance by Hugh Jackman. I'm sure some may dismiss the script as a load of pretentious claptrap, but I personally found it both visually and aurally enchanting as well as deeply moving. However you choose to look at it, The Fountain contains the kind of imagination and invention that is all too often missing from mainstream cinema and for that reason alone it is worth 90 minutes of anybody's time.

I like Darren Aronofsky. His films are just really well made and exude craft. Having liked all the other films of his I've seen, I figured that the inevitable slump would occur eventually, even though I didn't want it to. There is a lot to like here. It's not quite a bad film, just a deeply flawed one. "Interesting failure" I think is a good way to put it. Or maybe slight failure. The concept is cool, but the plotting, script, and execution are where the issues are. Also, it's okay to be a little obscure and make people have to think, but that's not the case here. This is just confusing and scattered. The visuals (and preference for camera tricks and practicals over tons of CGI) are amazing. They're are beautiful, and the camera work is likewise gorgeous. The performances are also pretty good, especially since the leads do double and triple duty. I did like the formal techniques and the use odd match cuts and recurring motifs...that's all good, but like I said, the concept and execution are rough. I did find the film engaging, and got something out of it, even if it's really confusing. As I said, this is a slight failure, but it's interesting, and has merits, so while it isn't quite a real success, there's enough good here to warrant a viewing.

"My God, it's full of shit!" But seriously folks - after just one viewing - i'm just .. wow - huh?! Watching the film, I was wildly applauding Aronofsky's superballsy audacious vision while simultaneously cringing at his simplistic sentimentality. 2001 + What the Bleep Do We Know + dimestore romance + any episode of E.R. = wtf? For what it's worth - i thought Hugh Jackman was great - perhaps the only tangible revelation of the film.