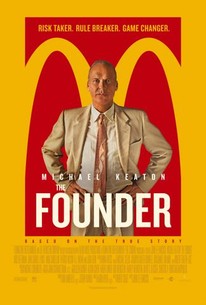 Critics Consensus: The Founder puts Michael Keaton's magnetic performance at the center of a smart, satisfying biopic that traces the rise of one of America's most influential businessmen -- and the birth of one of its most far-reaching industries.

Critics Consensus: The Founder puts Michael Keaton's magnetic performance at the center of a smart, satisfying biopic that traces the rise of one of America's most influential businessmen -- and the birth of one of its most far-reaching industries.

Critic Consensus: The Founder puts Michael Keaton's magnetic performance at the center of a smart, satisfying biopic that traces the rise of one of America's most influential businessmen -- and the birth of one of its most far-reaching industries.

Directed by John Lee Hancock (SAVING MR. BANKS), THE FOUNDER features the true story of how Ray Kroc (Michael Keaton), a struggling salesman from Illinois, met Mac and Dick McDonald, who were running a burger operation in 1950s Southern California. Kroc was impressed by the brothers' speedy system of making the food and saw franchise potential. Writer Robert Siegel (THE WRESTLER) details how Kroc maneuvered himself into a position to be able to pull the company from the brothers and create a billion-dollar empire. The film also stars Laura Dern as Ray Kroc's first wife Ethel; John Carroll Lynch as Mac McDonald and Nick Offerman as Dick McDonald.

News & Interviews for The Founder

View All The Founder News

Critic Reviews for The Founder

The man, played with dark relish by Michael Keaton, has the fabulous name of Ray Kroc (there is a suitably reptilian air to his grin as he says things such as: "Contracts are like hearts. They're made to be broken").

It is a surprisingly nuanced and barbed look at the American Dream and its flip side.

The Founder could have been a Preston Sturges-style comedy/biopic - a high-mischief fairy tale with moral resonance. Instead it does little but polish Ray Kroc's boots.

A special, worthwhile film that promises more confrontational Hollywood films in the future.

The Founder ends up feeling extremely wishy-washy, unable to scrub the nastiness of Kroc's success but also incapable of confronting it.

The Founder feels like a noble and worthy attempt to set the record straight, and on that front, it completely succeeds.

The Founder shows us how Kroc became a success, but skirts telling us the costs of that success and the end results. It wants to have its Quarter Pounder and eat it too.

The Founder is a showcase for quality and excellence both behind the lens and in front, the latter thanks to stellar performances led by Michael Keaton.

Business grad students might find seeing this film advantageous and interesting, but for us, it's nostalgic, but not all that tasty.

It does not offer much more than a film made for television but, yes, with a great Keaton. [Full Review in Spanish]

It's a classic American story. It's the American dream. And it's a lie.

Audience Reviews for The Founder

Pretty entertaining and well paced biopic about the making of McDonald's. While the beginning is pretty amusing and you feel sympathy for the ambiguous con man character played perfectly by Keaton, things get a little more serious in the end and you pretty much change your view of the man. That's an interesting untold story full of 1960s nostalgia but rather modern camera work and editing for our viewing convenience.

Reads like an unpolished draft. Tried to cram too much in instead of focusing on only great scenes with emotional impact. More like a book report than a biopic. Made me crave a McD's cheeseburger though so I guess in that sense, it was a success.

Good movie, but about a hideous man. I didn't know the story of Macdonald's prior to watching this and I really felt sorry for the brothers who owned the original restaurant. That guy who took it over was a sleazy little weasel. I spent most of the movie wishing harm on him!

The Founder is a very thorough depiction of business. As the chronicle evolves, we get a tale that metamorphosizes from a drama about entrepreneurial spirit into a commentary on the sins of capitalism. What emerges is a riveting portrayal of Ray Kroc. He comes across as a very intelligent guy but he can be a ruthless tycoon as well. The brothers are depicted in a more sympathetic light. They place a premium on high-quality ingredients for example. Yet their "stuck in a rut" way of thinking is part of an outmoded business model that has kept their attempts to franchise from succeeding in a big way. Did Ray Kroc exploit the brothers' geniality or was he the visionary that saw opportunities that they didn't? It's an interesting discussion and one that the screenplay encourages. You will both admire and chastise this man. That duality grounds The Founder. I enjoyed every morsel that it served up. fastfilmreviews.com