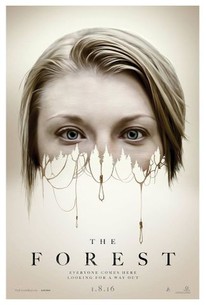 Critics Consensus: The Forest offers Natalie Dormer a few chances to showcase her range in a dual role, but they aren't enough to offset the fact that the movie's simply not all that scary.

Critics Consensus: The Forest offers Natalie Dormer a few chances to showcase her range in a dual role, but they aren't enough to offset the fact that the movie's simply not all that scary.

Critic Consensus: The Forest offers Natalie Dormer a few chances to showcase her range in a dual role, but they aren't enough to offset the fact that the movie's simply not all that scary.

Against the backdrop of Japan's Aokigahara forest, where people go to end their lives, an American woman braves the mysterious, uncharted terrain to search for her missing sister.

Lidija Antonic
as Mother of Sara/Jess

Carni Deric
as Father of Sara/Jess

News & Interviews for The Forest

View All The Forest News

Critic Reviews for The Forest

The storytelling is very perfunctory. Some of the shock tactics are moderately effective but, as the film-makers attempt to combine traditional horror movie elements with insights into the troubled psychology of their heroine, they soon lose their way.

The Forest is a dumb and dreary horror movie that's notable only for its racial insensitivities, lack of horror, and for making Natalie Dormer from Game of Thrones play identical twins distinguished only by hair colour.

Unearned jump-scares abound - handily, Japan is full of toothless OAPs who randomly leap at young women during the night - as do the kind of obviously digitally augmented ghouls that dispel a creepy atmosphere on contact.

It's a very by-the-numbers movie, and Aokigahara becomes just another generic creepy forest that might as well be fictional.

The film's biggest problem is its over-reliance on familiar genre tropes - a succession of cheap jump scares releases the dramatic tension instead of adding to it.

Instead of an exploration of Japanese history and culture, the narrative is filtered through white, western eyes. Plodding and uninspired, not particularly frightening, and worst of all, boring.

While director Jason Zada's first feature film stayed away from being a carbon copy of standard J-horror fare, it lacked the complexity and substance to hold a seasoned horror fan's attention.

It's the kind of screenplay where a twist happens with no real set-up, mainly because it is the only way the writers can figure out how to get to the forced ending they want.

It has ghosts, it has atmosphere, it's well-acted and scary. Yes, it tries too hard in some respects, but it's a respectable effort, and it works well enough to be worth watching.

Some bright spots do redeem The Forest's presentation. Otherwise, Zada's thin and jittery payoff is nothing more than a toothless trek through the pseudo petrified Forest.

The film simply failed to create a complete mythology in their plot based on the real life myths. The result felt like pieces of several different stories chopped up and thrown together in a way that lacked substance and scares.

Audience Reviews for The Forest

I gained absolutely nothing from this experience bar the knowledge that Natalie Dormer makes for an attractive goth. Final rating:? 1/2: - Boring/disappointing. Avoid if possible.

Jason Zada's mind zap in The Forest gets lost within the trees. The first 30 minutes of this 90 minute psychological thriller is a slow burn of build up. The final hour is a trek which wanders and never leaves any satisfaction. The pacing picks up by the finale, while the sense of realism is eventually loses touch. The setting and creepy effects are worth noting, but other than that, there just isn't enough to push this picture past mediocrity. Natalie Dormer is watchable; however, she doesn't get much help from Taylor Kinney, who plays it all bland as trees in the forest. The Forest is made of trees and that is what this film delivers.

Psychological drama as one sister looks for the other sister in a Japanese forest famous for psychological drama. Everything the main character is told not to do, she does. It gets old fast. I began to pray for her death.