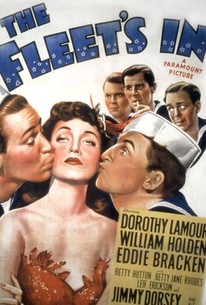 This bubbly, romantic musical comedy is based on a hit Broadway show, Sailor Beware! and centers on shy young sailor William Holden's attempts to get the frosty Dorothy Lamour, as the sexy "Countess of Swingland" to give him a public kiss. The whole mess comes about when furloughed seamen, including Holden, head out for the colorful Swingland club to hear her sing. Though a hopeless introvert, Holden's buddies are convinced that he is a true lady killer and begin wagering on the odds of his getting to kiss Lamour. Beautiful, talented Betty Hutton makes her film debut as Lamour's vivacious roommate. Songs include: "Arthur Murray Taught Me Dancing in a Hurry," "Build a Better Mousetrap," "The Fleet's In," "Why Doesn't Anything Happen to Me?" "Tomorrow You Belong to Uncle Sam," and "Tangerine."

Dorothy Lamour
as The Countess of Swingland

Lorraine and Rognan
as Dance Team

Jack Chapin
as Sailor
View All

Critic Reviews for The Fleet's In

The interesting thing here is that Dorothy Lamour is in this movie. Everything else is incidental. [Full Review in Spanish]

Audience Reviews for The Fleet's In

William Holden's a Casanova Titanic whom his Navy buds bet can't get pass Dorothy Lamour's iceberg, but he's really no Casanova at all. Oh snap, now what? Not that it matters in the slightest, as the outcomes a given anyway, and the whole film's merely a commercial punching songs of the day. And dance. Lotsa dance. There's even a conga line! How did Bill get into this mess?!? Serviceable service comedy, though the yuks are pretty starchy.

Loud and busy but also kind of fun.

The Fleet's In Quotes