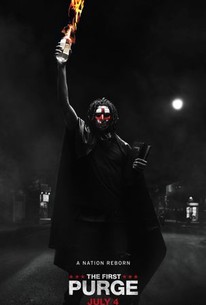 Critics Consensus: The First Purge should satisfy fans of the franchise and filmgoers in the mood for violent vicarious thrills, even if its subtextual reach exceeds its grasp.

Critics Consensus: The First Purge should satisfy fans of the franchise and filmgoers in the mood for violent vicarious thrills, even if its subtextual reach exceeds its grasp.

Critic Consensus: The First Purge should satisfy fans of the franchise and filmgoers in the mood for violent vicarious thrills, even if its subtextual reach exceeds its grasp.

Behind every tradition lies a revolution. Next Independence Day, witness the rise of our country's 12 hours of annual lawlessness. Welcome to the movement that began as a simple experiment: The First Purge. To push the crime rate below one percent for the rest of the year, the New Founding Fathers of America (NFFA) test a sociological theory that vents aggression for one night in one isolated community. But when the violence of oppressors meets the rage of the marginalized, the contagion will explode from the trial-city borders and spread across the nation.

News & Interviews for The First Purge

View All The First Purge News

Critic Reviews for The First Purge

The ideas evaporate and the gun violence, ultimately, is all that remains. Which, perhaps, is deliberate, and very American, but deadening all the same.

It is surprisingly powerful and hard to watch.

The First Purge is still ultimately an old-fashioned B picture but it has more of an edge than its predecessors.

Unfortunately, despite a strong start and some action-movie pleasures throughout, "The First Purge" is a little too heavy handed, routine and ridden with logic problems to make its points stick.

Yes, it's a sick idea, but with each passing year we seem to inch ever closer to feeling like we might one day have one of these things for real.

An unabashedly violent B-movie throwback, the sort director John Carpenter used to make, with moments that resonate with real life.

Visually, this film is the best of the franchise, which have always leaned heavily on good production design and let the cuts fall where they may.

Enjoy this low key black person vs the system movie with its video game logic and a political heart between hamburgers and fireworks. Just make sure The Purge isn't happening in real life anytime soon.

The First Purge takes the series to new, gloriously radical heights in a powerful, if unsubtle, expression of the fear, frustration and anger of people of color in the United States.

The First Purge offers nothing new or exciting - it's not even suspenseful or scary.

It's a weird kind of catharsis, but The First Purge also reminds us that, no matter how dark things get, there's still hope if we all band together for the greater good.

The fourth film in the "Purge" horror franchise is a timely, and surprisingly earnest, glimmer of hope in summer filled with real-world cruelty and government oppression.

Audience Reviews for The First Purge

A disappointing and rote prequel, The First Purge delivers some exciting action but its politics are rather stale. When a new political party is swept into power they launch an experiment in which Stanton Island is quarantined and all crime there is legalized for twelve hours, however the resident's apathetic response soon leads the organizers to take matters into their own hands. Unfortunately the class warfare message is really heavy handed and one sided, as there's no rationalization or justification given for the Purge (as there was in the other films). Still, the film does a great job at building suspense and excitement during the chases and fight scenes. And the character drama is pretty good too. The First Purge is a riveting thriller, but the blatant propaganda drags it down.

I'm not the biggest fan of The Purge franchise, it is one of those interesting concepts that was mishandled. I liked this film much to the displeasure of others by looking at the audience score currently at 2.5. The film was a little more interesting compared to the other films, mainly because of the political background and the lengths they will go to achieve an ideal. The film is full of violence and the third half of the film transcends into the roots of the franchise. This is probably the last in the franchise but considering the money it made, maybe not. If you're new to the franchise, this is a good jumping in point. 23/09/2018.

I'm not a big horror fan, but I always appreciate when a great horror flick comes along. When The Purge was released back in 2013, I was very underwhelmed by it, as the premise itself intrigued me enough to warrant a viewing. The biggest issue I had with that film is that it was a country-wide event that was self-contained in one house. When the second film came along I was inclined to give it a chance because it did what I hoped the first film was going to. Now, this franchise has gone n for far too long and we have arrived at a prequel in The First Purge. The idea of going back to the very first purge has potential, but this film lives up to nothing of the sort. Anything good to speak of this franchise has now been killed in my eyes. This is easily the worst film in the franchise and one of the worst films I've seen in 2018, period. Taking place years before the events of the original film, an experimental purge is held on Staton Island in New York. Dealing with gangs, families, and people who just have the urge to murder, this film focusses on many different people, making it a jumbled mess of a movie. The plot of this film is no different than any of the previous installments, aside from not quite making a valid argument as to why these events even take place each year, which is what I felt this film's only job was in the first place. Failing to provide insight as to why this event continues on is just the icing on the cake of what makes this film so dreadfully bad though. Although I'm not a huge fan of the franchise, each consecutive film was at least able to provide characters that had a backstory for you to follow and while this film attempts to, it comes off as lazy writing, stereotyping people and giving them nothing but clichéd backstories all across the board. If you literally go to watch these films based on the fact that people murder each other and you don't mind having zero depth to the characters involved, then this film may slightly please you, but at least in my opinion, your bar for entertainment might have to be pretty low for this one to impress you. On top of these elements, this is a very easy film to nitpick. The First Purge is riddled with jump scares that come out of nowhere (which I can't stand), some of the blandest dialogue I've heard all year, and quite frankly some very lazy editing techniques. This film has a relatively low budget, just like its predecessors, but it's no excuse when the editing and visual effects would be noticeable in a movie that cost a studio ten bucks. As I mentioned, this movie can be nitpicked until the end of time, but there is one particular scene that ruined any hope I had for this film. Surprisingly, this scene involves a character played by Marisa Tomei. I love her as an actress, but I was shocked to see her appear in this film. Her character is only present to spew expositional dialogue that will even seem dumb to young kids. There is a sequence in this film that is shown through a video feed to her character and after the audience witnesses that they're all wearing masks, she literally exclaims that they're wearing masks, so that the viewers will understand those are the people who are choosing to purge. This film has quite a few moments like this and it just had me shaking my head in disappointment. The First Purge hardly has a single redeeming quality, aside from maybe a visual choice of giving glowing contact lenses to the people who choose to purge. That element was cool visually, but that had no effect on the overall movie. When your film fails to have your audience care about who lives and who dies, there's something seriously wrong. I truly felt that one of the most unlikeable characters was one that you're meant to be rooting for, which gave me a very uncomfortable viewing experience. In the end, this movie fails on more levels than its predecessors, so even if you're a slight fan of the franchise, I still don't know if this one warrants a recommendation. The First Purge is garbage entertainment.