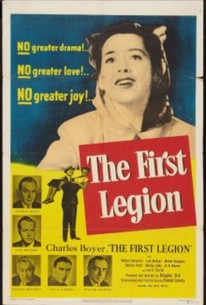 Since its lapse into public domain in 1978, First Legion has joined Love Affair and Algiers as the most readily available of Charles Boyer's films. Boyer plays Fr. Marc Arnoux, the head of St. Gregory's seminary, who can never quite shake the feeling that he shouldn't have given up his career as an attorney. His fellow Jesuit priests likewise occasionally question their calling, especially crotchety Msgr. Michael Carey (William Demarest). One by one, however, the priests are won over by various "miracles" visited upon them. Barbara Rush co-stars as a crippled girl who indirectly benefits from the priests' renewed faith. The First Legion was produced and directed with surprising restraint by Douglas Sirk.

Bill Edwards
as Joe
View All

Critic Reviews for The First Legion

An unexpectedly complex examination of faith and doubt.

There are no featured reviews for The First Legion at this time.